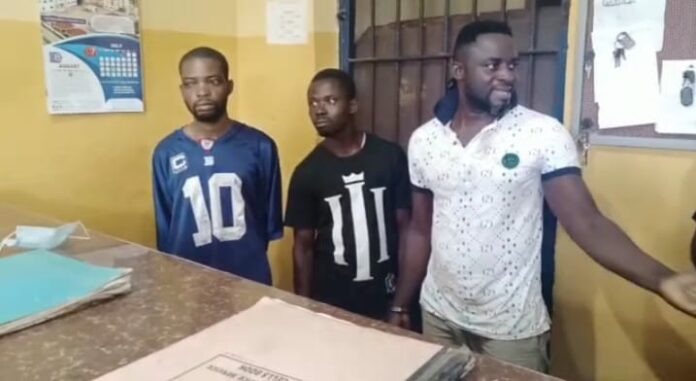 Police in the Ashanti Region have arrested two more suspects in connection with the killing of a cabdriver at Feyiase Akoyem in the Bosomtwe District.

This brings the number of suspects arrested in connection with the death of the deceased, Israel Agyei Manu to three.

The two have been named as Richard Addai, a 35-year-old Fetish Priest Assistant and Anthony Sekum, a 22-year-old labourer. A key suspect, Rashid Ibrahim, 32, had earlier been arrested and detained by the police.

But all three, made their first appearance at the Kuntenase Magistrate Court, Thursday.

They have been charged with murder and abetment of murder, court documents show.

Briefing the court, police prosecutor who doubles as the District Commander for Kuntanase, DSP Eric Akwaboah said the prime suspect Rashid Ibrahim in November 2020 visited the shrine of a Fetish Priest known as Black Akasha, aka “Sha” for money rituals after watching one of his programmes on Amansan TV, a local TV station.

Rashid Ibrahim proceeded to the shrine and was charged Ghc 900. After some incantations, the Fetish Priest asked Rashid to produce human head for the rituals which he agreed, the court heard.

On July 4, 2021 Rashid Ibrahim hired the services of Israel Agyei Manu to Feyiase where he pleaded with Israel to accompany him pick his speakers.

He butchered him along the way and cut off his head. He was later arrested together with his accomplices after police intelligence.

DSP Akwaboah however prayed the court to remand the suspects into police custody for further investigation.

He told the court the police is also searching for the Fetish Priest and one other suspect to help police in their investigations.

The court presided over by His Worship Francis Asakia Ana-am remanded the suspects and adjourned sitting to July 22, 2021.