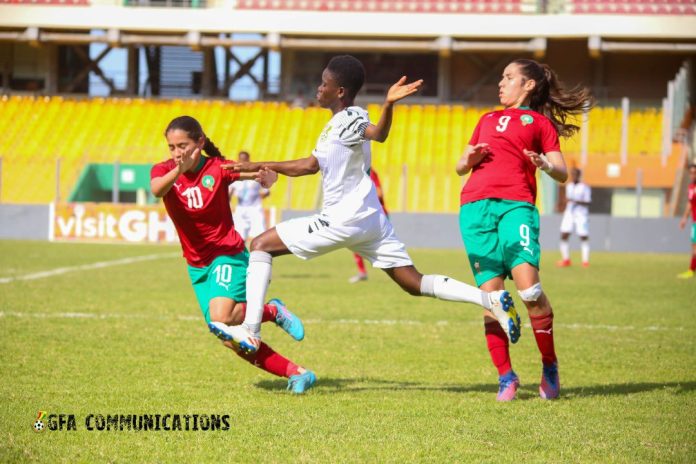 Ghana’s Female U17 team, the Black Maidens defeated Morocco in the first leg of the final round of the FIFA U-17 Women’s World Cup Qualifiers on Friday afternoon.

The yyoung girls from Ghana secured a very important win over their Moroccans counterparts to stand a big chance of sealing qualification.

The determined Ghana kept their opponents at bay with a crucial cleansheet in the first leg which could be very helpful with one game away from a record 7th appearance at the FIFA U-17 Women’s World Cup.

Young and gifted attacker Stella Nyamekye scored a wonderful goal in the first half after just 18 minutes of the match to put the hosts 1-0 up to settle early nerves.

Ghana ddominated the game and went back to the dressing room with their noses in front at the break.

Nancy Amoh provided a moment of magic when she scored a jaw-breaking and an eye-catching free-kick in the second half of the match to give Ghana a 2-0 lead after 65 minutes.

The were no more goals in the second half of the game after the 65th minute free-kick as it ended 2-0 to the Maidens.

Ghana mmust avoid a two-goal or more defeat in Morocco in the second leg in two weeks time to book a place in the next FIFA Women’s U17 World Cup in India this year.

He that handles a matter wisely finds good – Mahama