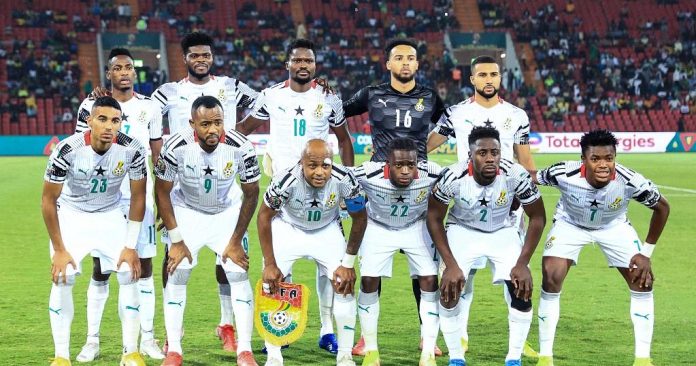 The West African derby between the Black Stars of Ghana and the Super Eagles of Nigeria in Kumasi at the Baba Yara Sports Stadium on Friday evening ended in goalless.

The improved Ghana team held the Nigerians to a 0-0 in Kumasi, a game they could have won on the balance of play.

Black Stars begun the game on a blistering pace and just a minute into the match won a corner which was wasted by Jordan Ayew.

Three minutes later, Felix Afena Ohene-Gyan of AS Roman’s went way off the target but his effort gave the team.

Youngster Afena-Gyan tried to go past Trost-Ekong before forcing a strike which was kept out and just on the hour mark, Fatawu Issahaku nearly grabbed the opener after firing from outside the box only to be parried away by Francis Uzoho.

Nigeria had their moments in the first half with Victor Osimhen and Joe Aribo coming close in the final ten minutes of the half.

The Black Stars were the better side for majority of the match and controlled the opening half but had nothing to show for it as the first half ended without a goal.

Ghana, after the break were determined to get a goal but it was Nigeria who had the best of opportunity early in the half, when Moses Simon pulled a great save from Jojo Wollacot.

With twenty minutes left Mohammed Kudus dazzled and danced his way into the box before firing but Uzoho was there to save Nigeria, forcing the ball off for corner kick.

The visitors were awarded a penalty after Iddrisu Baba had his hand to the ball but a VAR check reversed the decision.

Coach Otto Addo replaced Fatawu Issahaku with Osman Bukari, who added the some fire power in attacker with his marauding runs.

However, the end product was not there for the Black Stars as the game ended in a goalless stalemate.

Ghana travel to Abuja in four days time for the second leg of the World Cup playoff.