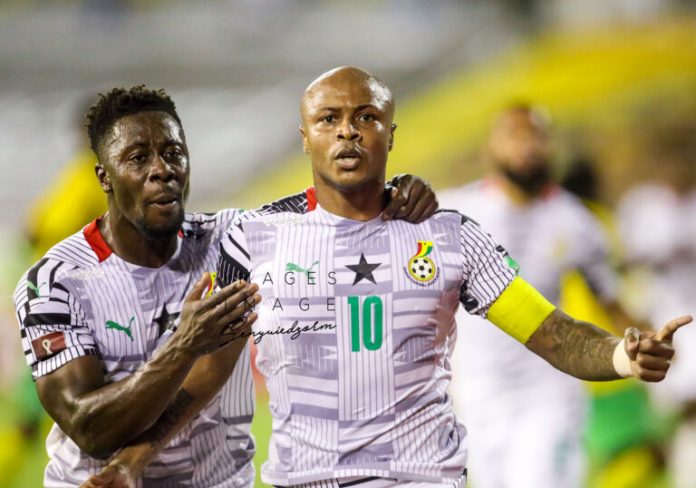 Black Stars inflicted a painful defeat on the Bafana Bafana of South Africa to book a place in the Qatar 2022 FIFA World Cup Qualifiers playoffs with a narrow win on Sunday evening.

Centenarian and captain Andre Ayew scored the most important goal in the FIFA World Cup Qualifiers against South Africa on Sunday evening at Cape Coast to make sure the Stars get a chance of making it to their fourth World Cup competition.

The 31-year-old attacker converted a 33rd minute spot kick to secure Ghana an important win over the Bafana Bafana of South Africa to help the four-time AFCON champions book a playoffs spot in the next FIFA Mundial.

Ghana started the game on a blistering pace and started imposing themselves very early in the game with some positive passage of play.

The home team had half chances early in the game but the South Africans were resolute at the back to prevent the Ghanaians from scoring.

Ghana’s star Mohammed Kudus picked up an unfortunate injury very early in the game and had to be replaced with Daniel Kofi Kyereh who plays for German Bundesliga 2 FC St Pauli.

Jordan Ayew was sent through on goal but fluffed his effort with just the goalkeeper to beat.

Kyereh, after coming on for Kudus was sent through on goal but the playmaker sent his effort over the crossbar.

On the 33rd minute mark, Daniel Amartey was fouled in the box and Ghana was awarded a spot kick which was deliciously converted by captain Andre Ayew to give Ghana the lead going into the second half.

South Africa pushed for the equalizer in the second half and created some decent chances but Alexander Djiku and Amartey protected Ghana’s defense well to twat any threat from the visitors.

Youngster Kamaldeen Sulemana was offered enough space on the left side of attack and came close to providing a second goal but his effort was dealt with well by the defense.

He nearly scored the second goal for Ghana when he outwitted the South African goalie only to put his effort wide.

South Africa came close to scoring late on a couple of occasions but Leicester City defender Daniel Amartey and Djiku of Strasbourg saved the Ghanaians from conceding a late goal.

The game ended 1-0 which takes Ghana to the next round of the qualifiers which will take place in March 2022 for a place in Qatar.

Both South Africa and Ghana finished level on points but the Black Stars edged the Bafana Bafana just by a goal goal difference by scoring seven as against South Africa’s six.

Ghana’s economy must work for all Ghanaians – Mahama