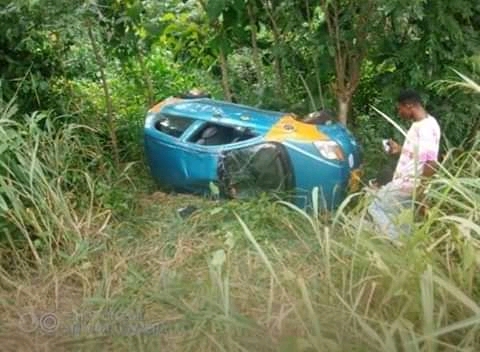 A motor vehicle accident on the Obogu-Banso road near Juaso in the Asante Akyem South District of the Ashanti Region has claimed the life of a female WASSCE candidate.

Esther Nyamekye, 23, a student of Ofoase Senior High Technical School at Juaso, was killed in the accident at about 15:00 GMT on Tuesday, June 23.

She was part of four occupants of a Chevrolet Matiz Taxi cab with registration number GR 5188 –18 while returning to school to prepare for her exit exams —after spending nearly four months at home following a Covid-19 shutdown.

Police said the suspect driver named as Evans Asare, 26, lost control of the vehicle on reaching a spot near the Banso Health Center.

The vehicle reportedly veered off the road and summersaulted into a nearby bush, police said in a statement.

The victims were rescued by locals who rushed to the scene minutes after the incident. They were rushed to the Juaso Government Hospital where Elizabeth Nyamekye, was pronounced dead on arrival.

The suspect driver, a 13-year-old boy and a 43-year-old man named as Kofi Wiafe were also admitted at the same hospital after they sustained minor injuries, police said.

The badly damaged vehicle had been towed from the accident scene by the police who told Dailymailgh.com that an investigation has commenced.

Tributes are already pouring in from friends and sympathizers, especially students of Ofoase Senior High Technical School where the victim, until her death, was a school chaplain.

Her body has since been deposited at the Stewards Mortuary at Yawkwei, near Konongo for preservation and autopsy, a statement from the police said.

Migration in the Mediterranean: why it’s time to put European leaders...

Throw it out – GFA tells court over writ challenging elections