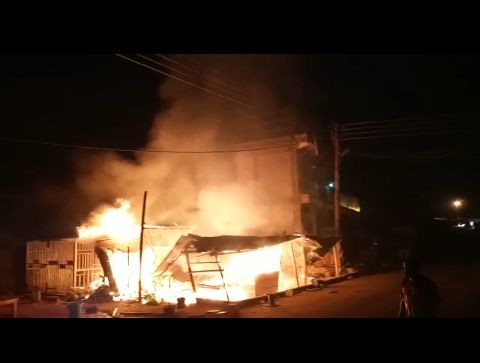 A fire outbreak at a local market in the Western Region town of Asankragua has razed down four stores.

The incident which happened just before 11 pm on Friday, December 18, also destroyed properties worth thousands of Cedis.

Residents had to battle the inferno after distress calls to the Amanfi West Division of the Ghana National Fire Service went unanswered.

Some residents reported that the officers of the Service in the municipality looked on helplessly as the fire kept burning the stores as a result of a broken-down fire tender for the past six months.

The youth in the area intervened and brought the fire under control after two hours.

“When we called the fire service, they told us that their fire tender had broken down. Can you imagine that an entire Municipal assembly does not have a fire tender?

“So we the young men here including myself had to take it upon ourselves to douse the fire,” one resident told Accra-based JoyNews.

Another added, “I am impressed with the contribution of everyone. We did our best to put out the fire. But I entreat our leaders to fix our fire tenders because next time, we may not be this lucky.”

On his part, the District Officer Grade One of the Ghana Fire Service in the Municipality, Justice Agyee confirming their inability to bring the fire under control said there was nothing his outfit could do without a fire tender.