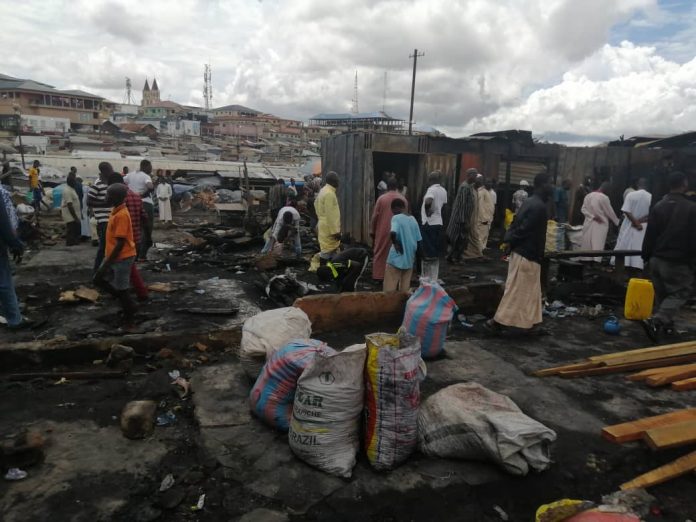 Yet another mysterious fire at the Kumasi Central Market has burnt down over 50 shops at French Line, a pavilion located in the area.

Millions of cedis worth of goods have been lost in the recent blazes and officials are yet to establish the cause of the blaze.

Reports said the fire began just before Sunday dawn and spread quickly through the enclave razing several other shops to the ground.

Fire engines raced to the scene and fought the blaze before running out of water.

Police were deployed to try to prevent looting.

Some affected victims are pointing to faulty electrical installations at the market.

“As at when we heard of the news and got to the grounds, the fire was really serious. We weren’t allowed to go close because of how dangerous it was. By the time they quenched the fire, our shops had been burnt to ashes. We are appealing on government to support us financially to rebuild our shops,” said a visibly distraught shop owner.

“I was called around 1:30 am to rush to the market because my shop was on fire. This is the first time the market has been set on fire for the fifteen years that I’ve been working here. We can’t really tell what the cause is. I sell drinks and water. I had three fridges in there and one costs about 20million cedis,” another lady lamented.

Officials from the National Disaster Management Organization (NADMO), who were at the scene said they would collaborate with firefighters to investigate the incident.

Roland Oduro, who is in charge of operations at NADMO at Manhyia South Sub-metro, where the market is located said, “we gathered about 54 shops were destroyed by this fire. It’s really bad that this thing has to happen at this time of the year. Per our investigations, we have two different causes. Some are saying power fluctuation; others are saying faulty metres. But we’ll collaborate with the Fire Service and get to know the real cause of the disaster.”