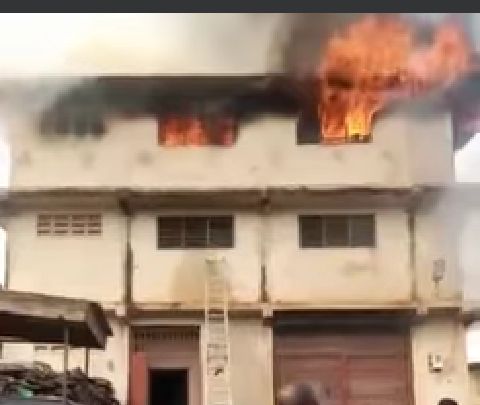 A firefighter suffered arm injuries while battling an inferno at the Suame Magazine enclave in Kumasi, officials say.

The Tuesday morning blaze which started at the upper part of a two-storey warehouse razed several spare parts running into millions of cedis.

At least four fire machines were deployed to battle the blaze as officials say access to the scene remained a major challenge.

A Commander in charge of Operations at the Ghana National Fire Service DO I Francis Darko Konnoh told reporters that the officer is receiving treatment at a health facility.

“It is a storey building fully parked with spare parts and the entire building was engulfed in the fire and it had gained seat.”

“It is quite unfortunate we have been recording fire incidents [in Kumasi] in the last few days. We have not recorded any casualty except this one which had one f our officers have got a broken arm and he has been sent to the hospital”, the Fire Commander explained.

Owner of the warehouse who was spotted at the scene watched helplessly as volunteers joined the fire team to douse the flame.

DO I Francis Darko Konnoh says investigations have started.

“The biggest challenge was access to the scene but the fire is under control”, he said.