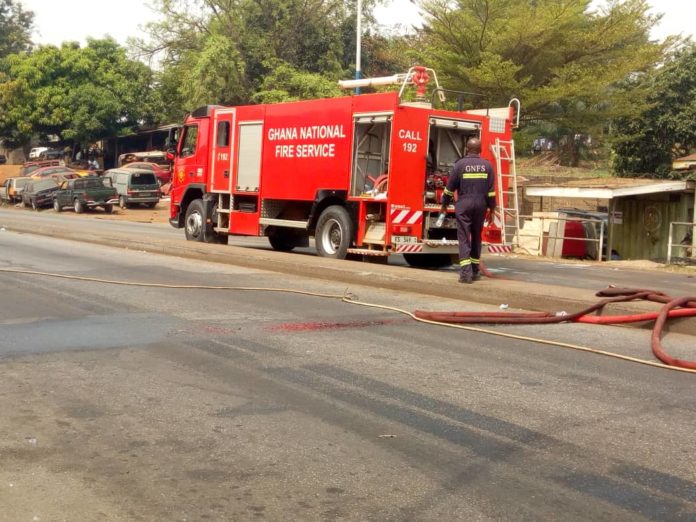 The Ghana National Fire Service (GNFS) says an escalation of attacks on its fire crew might force them to withdraw emergency services from volatile areas especially in Zongo Communities in the Ashanti Region.

The warning came after a fire crew was attacked at Moshie Zongo – a settlement located in the Manhyia North sub-metro of Kumasi – after responding to a call about a house in flames on Tuesday, July 28, 2021.

Spokesperson of the GNFS in the Ashanti Region DO III Desmond Ackah who confirmed the incident to dailymailgh.com said the lives of the fire crew deployed to the scene were in danger and so there was no need staying in the town.

“They feel we delayed and therefore they were readily armed with weapons to hurt us so our men sensing danger returned to base.

“During emergency cases residents should give us the leeway to work and its for their own interest and normally such attacks occur in the Zongo Communities and we are going to organize a press briefing [on this issue] to see our next line of action. If we have to withdraw our services from such communities we will let you know”, the worried fire officer said in a telephone interview.

What happened at Moshie Zongo?

The fire outbreak at that enclave resulted in the death of two children. They belonged to a family of eight which had lived in the community for the past five years.

Properties including TV set, unspecified amount of money, clothes and other domestic wares were badly damaged when dailymailgh.com visited the scene.

The charred bodies have since been deposited at the morgue for preservation by the police. It still remains unclear what caused the fire.

Ashanti Region: Man dies after being hit by lightning at Asokwa