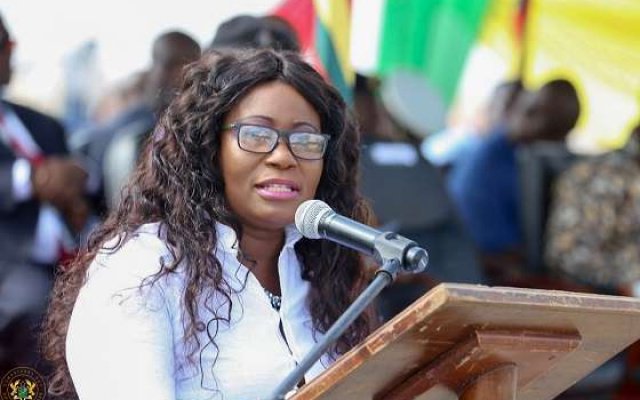 Fisheries and Aquaculture Development (MOFAD) Minister Hon. Elizabeth Afoley Quaye today informed Parliament that all the three companies that supplied fingerlings for the restocking of selected dams and dugouts in the 32 communities in the Northern Region have been duly paid as at January 25th this year.

She was in the House to answer a question which stood in the name of Hon. Frank Anno-Dompreh, MP for Nsawam-Adoagyiri who wanted to know when the contractor involved in the restocking of selected dams and dugouts with four million catfish and fingerlings would be paid.

The Minister who also represents Krowor constituency in Parliament informed the House that the Ministry as part of activities to promote aquaculture development, carried out the restocking of dams and dugouts with catfish, tilapia and heterotis fingerlings covering 32 dams and dugouts in 32 communities in the then three (3) northern regions and that the restocking was not limited to the Northern Region alone but also the then Brong Ahafo and Volta Regions with an initial identification of one hundred (100) communities.

The Minister further explained that the restocking intervention was expected to provide additional 10,380 metric tonnes of fish to enhance the nutrition intake of the target communities. As a result a total the restocking, a total of 10 million fingerlings were procured from three (3) companies namely M/S Northern Empowerment, M/S Flosell Limited and MS/Delta Fisheries Limited.

According to the Minister, all the three companies that supplied the fingerlings have been duly paid and except M/S Northern Empowerment Association which is yet to acknowledge receipt of the payments, the Ministry has received official receipts from M/S Flosell Limited and M/S Delta Limited.

The Minister refuted an allegation that there was a very high mortality rate of fishes following the restocking of the dams and dugouts but rather that the reported death of fishes occurred in the Volta Lake which was not part of the project.

In another development the Minister stated that steps are being taken to ensure waiver of tax on aquaculture and that a list of aquaculture inputs has been submitted to the Ministry of Finance and Economic Planning for consideration and inclusion in the Harmonised System and Customs Tariff Schedule (HSCTS) to reduce the cost of inputs and make them not only affordable but also to boost the industry.

Responding to a question which stood in the name of Hon. Rockson Kwame Dafeamekpor (South Dayi) asking when the Tongor-Dzemeni fish landing site will be constructed, Hon. Elizabeth Afoley Quaye informed the House of the Ministry’s plan to construct twelve (12) landing sites and two Mini Harbours in selected fishing communities including Dzemeni in the Volta Region and that financing has been received under the China Development Bank (CDB) Loan facility for ten of the sites.

These landing sites when completed are expected to facilitate the safe launching and landing of artisanal canoes and create and maintain a hygienic environment for fish handling. The Minister however concluded that Tongor-Dzemeni was not included in the first phase construction which is expected to start later this year but will be taken care of when construction of phase two of the project begins.