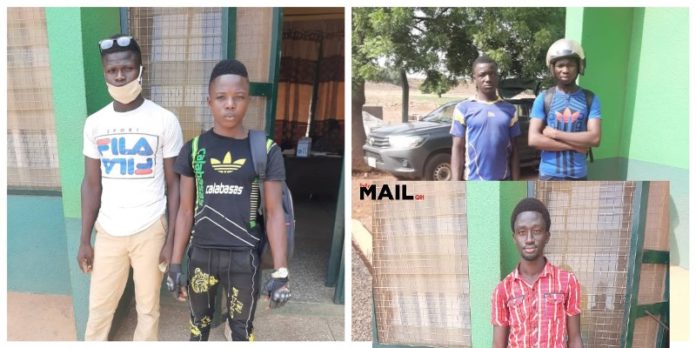 The Ghana Immigration Service (GIS) in the Upper West Region said the all-male suspects were arrested on Friday at about 12:30am.

They were intercepted by officials at Beat 2, an unapproved route in neighbouring Burkina Faso.

“Preliminary investigations revealed that they were destined for Kumasi and Techiman respectively for farming purposes,” the statement said.

The illegal migrants aged between 15 and 27 have since been screened by port health personnel and have been handed over to Burkina Faso authorities on the other side of the border.

Two motorbikes with registration numbers 32-UJ-6586 and 32-JW-5633 were also impounded during the operation.

The Ghana Immigration Service  has been making a number of arrests at the country’s unapproved routes, especially in the Upper West Region.

Ghana tightened its border restrictions as a measure to curb the spread of the Covid-19.

Public Affairs Director of the Upper West Regional sect of the Ghana Immigration Service ICO Ibn Seidu said: “As far as our operational functions are concerned, and, coupled with the President’s directive on the closure closure of our borders as part of the measures to halt cross border infection ofcovid-19, the Ghana Immigration Service is leaving no stone unturned in ensuring that undocumented, prohibited and irregular migrants are not allowed entry into Ghana through unapproved routes.

“We’re appealing to the general public, especially, the border residents to collaborate with Ghana Immigration Service to end the menace of irregular migration, he said.

He also cautioned Ghanaian citizens “who are complicit in the exodus migration of other ECOWAS nationals into Ghana through unapproved routes to either desist from the illegal act or be prepared to face the wrath of the law.”

Check out the 10 fuel stations in Ghana cheating customers

Strike: Technical Universities in Ghana to re-open without lecturers