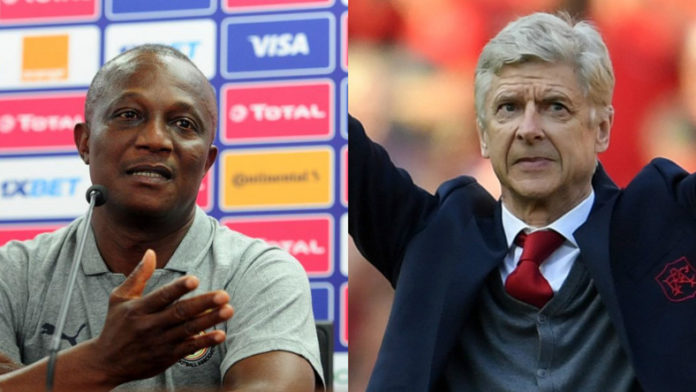 Departed Ghana coach, Kwasi Appiah — in a TV interview this week — has named former Arsenal manager Arsene Wenger as the coach he identifies most with, specifically highlighting how the Frenchman — like Appiah himself — “believed in young guys.”

Daily Mail GH agrees and, below, we draw a few more parallels between the pair from their most recent managerial spells.

On the touchline, Wenger wasn’t the most dramatic manager — you’d probably find him more animated when celebrating a truly aesthetic/decisive Arsenal goal or wrestling with his zipper, the great old foe — and Appiah often cut the same seemingly subdued presence, much to the annoyance of fans who would want to see a bit more action from the boss when the going got tough. As players who’ve worked with either coach would tell you, though, the softness doesn’t reach far beneath the exterior; deep within, away from the cameras, both could be really assertive — when they have to.

Fault Appiah all you want for not being a tactical Einstein (Wenger was, though), but the 59-year-old certainly takes credit for an unwavering — often unpopular yet ultimately rewarding — belief in scouting budding, young players and handing them a path to the top. It’s another box that Wenger, ever the great talent-spotter and star-maker, also ticked.

Like Appiah at the helm of the Black Stars, Wenger faced a barrage of criticism — unrelenting, cruel and, as would be explained soon, sometimes undue — when success at Arsenal dried up in the second half of his 22-year tenure. Shades of Brazil 2014?

Not unlike his mentor, Appiah fielded all of that abuse, even though much of it lay at the doors of superiors and subordinates who failed him. In all this, Appiah — again, not unlike Wenger — stood tall and proud and dignified, ambling silently from one disappointment to another, as though it were all his fault — that’s what he made us believe, anyway.

And yet they never gave up, earnestly trying to make the next attempt better than the last; eventually, both did lose their jobs — twice in Appiah’s case — but it certainly wasn’t because they lost the will to fight, even in the face of huge odds and disaffection among the respective support bases. Such dogged determination might have been stubborn, but it was also quite admirable.

Development will be even in new regions – Akufo-Addo