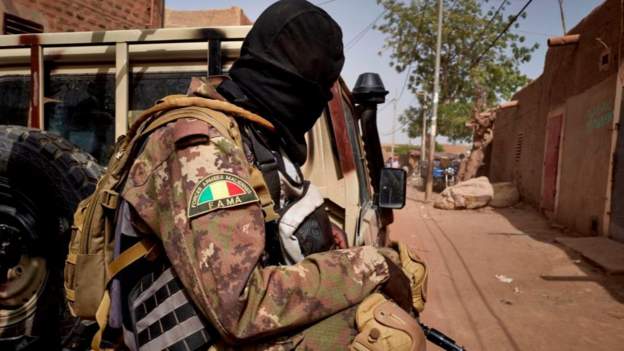 The Mali armed forces tweeted that a military convoy was attacked between Gomacoura and Diabaly, while a second attack staged at Camp Gamacoura.

Heavy weapons were used by the attackers, it said.

Five other soldiers were wounded and vehicles destroyed. A reinforcement has been dispatched to the area, the army said.

It is still unclear who staged the attack.

Mali has been facing attacks from jihadists, with 24 soldiers killed in June in a series of attacks that have spread to neighbouring Burkina Faso and Niger.

The country is also facing a political crisis – the opposition has been calling for the resignation of President Ibrahim Keïta for failing to stop the attacks and corruption allegations.

The opposition has rejected proposals made last month by five heads of state from the West African regional block Ecowas to form a unity government to resolve the crisis.

President Keïta last week appointed a slimmed down cabinet to work towards a government of national unity, and Prime Minister Boubou Cissé has reached out to a popular imam Mahmoud Dicko who is leading the protest movement.