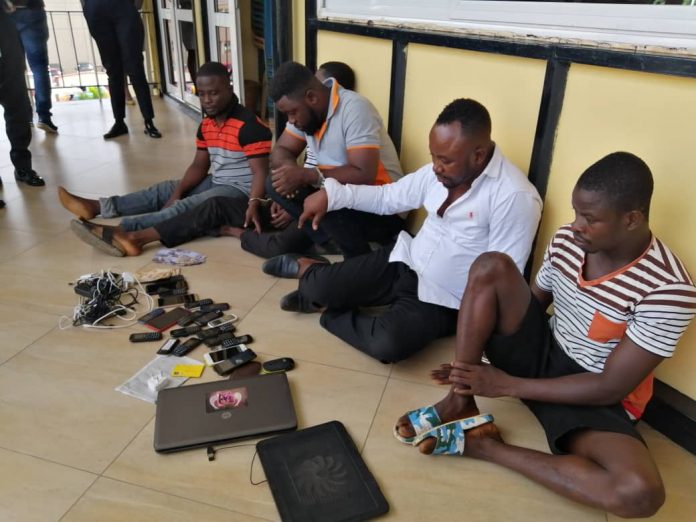 Five persons have been arrested by police in Kumasi, the Ashanti Regional capital for their involvement in fraudulent activities including money doubling.

They were arrested at their hideout at Atimatim, a suburb of Kumasi following a tip off by the police at the Tafo-Pankrono Divisional Command.

The suspects have been named as 33-year-old Karim Mohammed, a trader, Nana Kwadwo 31, a mason and Yaw Baffour 31, a business man.

The rest are Kwaku Yeboah, 31 a business man and 20-year-old Daniel Oppong, an electrician.

According to police, the suspects have succeeded in duping their victims under the pretext of issuing them with lotto numbers and doubling their monies for them.

Police also retrieved items including, mobile phones, a laptop, a cash sum of GHc 2,626 and a Toyota Corolla vehicle.

Director of Public Affairs at the Ashanti Regional Police Command, ASP Godwin Ahianyo said the suspects through their modus operandi advertise their activities on some local TV stations and Radio stations informing unsuspecting populace that they can make them rich by giving those interested lotto numbers to stake and in some instances double their monies.

“The suspects then publish their mobile phone numbers for monies to be paid on and after receiving such monies, the suspects smartly withdraw the money and discard the SIM card afterwards, making it difficult for those who have paid those monies to reach them.”

“These victims have paid monies ranging from GHS 50 to GHS 1,000″, narrated ASP Ahianyo, who is appealing to victims to make themselves available for investigations.

In another development, man who is noted for breaking into churches to steal musical instruments has also been sentenced to 3 years in jail.

The convict, 23-year-old Kwaku Asomani, a driver was found guilty by the Kumasi Circuit Court, presided over by Her Honour Mary Nsenkyire on Thursday, October 24, 2019.

Police have described the convict as a notorious burglar and has been carrying out his operations around Kwadaso, Ohwimase and Patasi — all suburbs in Kumasi.

ASP Godwin Ahianyo who confirmed the development says police are also on a manhunt for two persons who are the suspect’s accomplices.

Germany to grant Ghana €5 million to produce electricity from waste