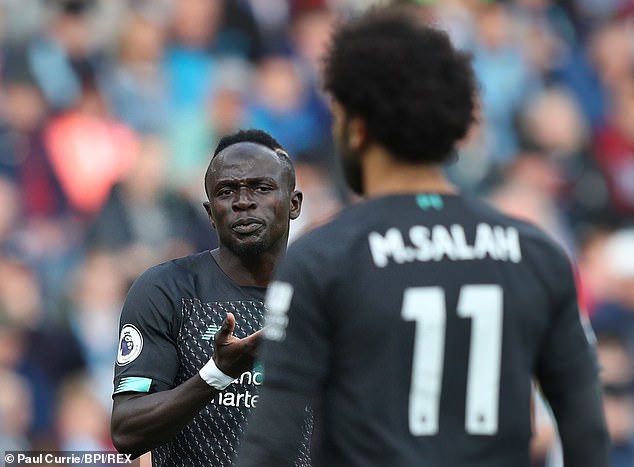 An angry Sadio Mane isn’t a sight one sees every day. Usually the Senegalese plays with a pearly smile that breaks through his sweaty dark face as often as he scores or a teammate does, and a great deal of that was on display after he got Liverpool’s second goal at Burnley in the Premier League last Saturday.

When he walked off the pitch about an hour later — replaced by Divock Origi — after a good day’s work, however, there wasn’t a smile to be seen; no, not a tooth. Well, maybe a few teeth, but certainly in no pleasant expression. Mane was fuming, uttering words that betrayed his fury and requiring restraint.

Shortly prior to Mane’s exit, he had stood in a position where striking partner Salah could have easily picked him out for what would almost surely have been a fourth goal for the Reds. The Egyptian didn’t, though, opting to get himself on the scoresheet — and failing, much to Mane’s unbridled and unmasked annoyance.

Manager Jurgen Klopp tried to manage the incident — a blot on an otherwise fine win — the best way he knows how to: with his characteristic toothy grin, charm, and some well-chosen words.

“It is not a big challenge but you can always have this with a striker,” Klopp told the media. “We will leave it 100 per cent because we won 3-0 and everyone goes away in different directions. No one will talk about this in a week.”

James Milner, one of the senior figures in Liverpool’s dressing room and a Premier League elder statesman, also tried, with an Instagram post — to which Mane responded — that sought to diffuse it all in one big puff of humor. But regardless of those honest attempts — and even more by the club’s apologists on other platforms — this is no issue to be laughed or shrugged off.

Maybe I misread this, but I’m pretty sure Sadio was reacting to me not getting brought on 🤷🏻‍♂️😂 #getmillyon #thanksmate

If you haven’t noticed brewing tensions between Mane and Salah ever since the latter arrived at Anfield in the summer of 2017 — quickly claiming much of the applause that was hitherto Mane’s — then perhaps you haven’t been looking close enough; at Turf Moor over the weekend, it only bubbled to the surface. And, oh, it bubbled!

During the period they have been together at Liverpool, the pair have fought shoulder to shoulder for Liverpool’s cause, while battling neck and neck for the biggest individual awards. Last season, they shared — along with fellow African Pierre-Emerick Aubameyang of Arsenal — the Premier League’s top-scoring honours. What’s more, Mane has finished runner-up to Salah for the last two African Footballer of the Year prizes; this year, after driving Liverpool to UEFA Champions League glory and the brink of domestic conquest, they’d both be up there again — and, indeed, for the foreseeable future.

Not that the rivalry between the two is altogether troubling, as skipper Jordan Henderson notes.

“That’s just us pushing each other all the time. I think that’s important. We all want to do better, we all want to improve, but we’re really close and I think we can deal with that.”

Even so, the heat must be turned down a notch, if Liverpool’s smooth start to the season isn’t to be sacrificed on the altar of personal glory. See, neither man is exactly Roberto Firmino, the other member of their free-scoring attacking triumvirate who is more consumed with playing for the team than for self. Situations like that which triggered Saturday’s momentary grudge would almost certainly recur — watch this space — and Klopp would have to iron out the creases before long.

Thankfully, he has the window of the season’s first international break — when neither would be departing for duty — to do so.