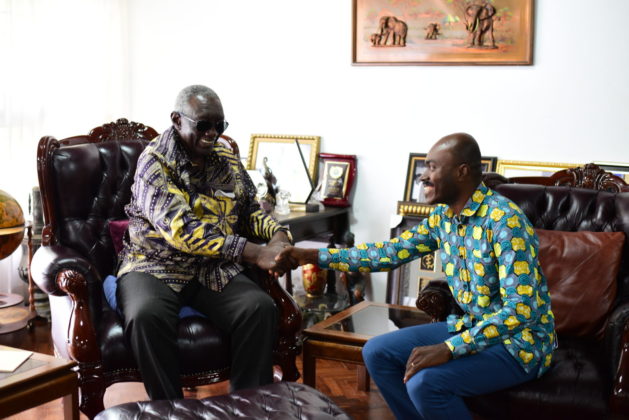 The special recognition was announced when the Founder of Ghana Cocoa Awards, Mr. Kojo Hayford, paid a courtesy call on the former president at his residence in Accra.

“Your Excellency, our research team after extensive work identified you as standing tall among a number of individuals who have made a highly impactful contribution to Ghana’s cocoa sector in its recent history”, Mr. Kojo Hayford explained.

He congratulated President Kufuor for his leadership in the cocoa sector and the policy initiatives he introduced during his tenure as President of Ghana, namely the Mass Cocoa Spraying and cocoa Hi-tech programmes.

Responding, President John Agyekum Kufuor said, “I am happy that through research you are according me this honour” and expressed joy that the effort of his administration is still having an impact on the nation.

“On the agricultural front, cocoa is the single biggest contributor to the GDP of our country, so it’s not something we should trifle with”, President Kufuor counselled.

President Kufuor who served Ghana from 2001 to 2008 is credited to have contributed immensely to the one million metric tonnes(mt) cocoa production feat in 2010/2011 crop season.

Production was 389,774mt when he assumed office in 2001, with pests, diseases and soil nutrient depletion identified as the bane of the plummeting cocoa production levels.

His administration’s introduction of the Cocoa Diseases and Pests Control Programme (CODAPEC) popularly known as Mass Cocoa Spraying and the cocoa Hi-Tech initiative in 2001/2002 would later have a far-reaching impact on Ghana’s production levels.

President Kufuor will be joined by six other highly distinguished personalities and organisations identified for recognition under the Special Awards Category of the historic first Ghana Cocoa Awards.

The seven GCA Special Award recipients were adjudged by the Selection Committee to have made impactful contributions in various capacities to the Ghana cocoa industry value chain in areas including policy, production and processing, farmer income and welfare, consumption promotion, health benefits of cocoa research and cocoa sustainability.

PREMPEH @70: Seven Things You Probably Didn’t Know About the College

Rafik to lead Etoile against Kotoko