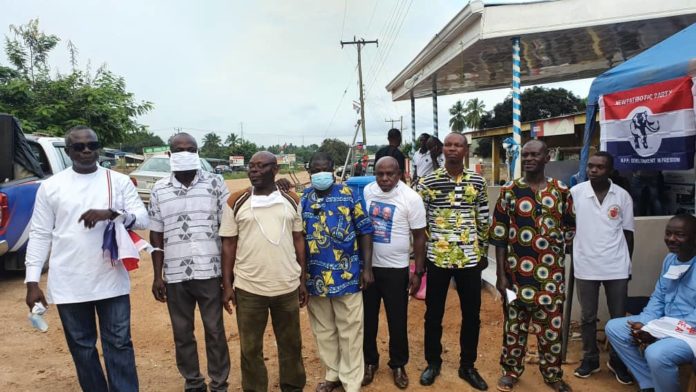 According to the eight, their decision is purely based on the fact that the Akufo-Addo administration has improved the conditions of Ghanaians, especially in the Awutu Senya Constituency.

They were full of praise for the NPP MP for the constituency, George Andah, who they said is “so caring and has done a lot to improve livelihood.”

Meanwhile, a group of NDC sympathisers in Akim Oda Zongo has publicly denounced the opposition NDC and crossed carpet to the governing NPP over what the group describes as “insulting promise” to the people of Zongo by forner President John Mahama.

The former NDC activists, clad in their NDC-branded T shirts stormed the Oda town durbar grounds over the weekend where a durbar of Chiefs was taking place, to announce their defection and reasons for their action.

Spokesperson for the group, Zulkifil Awal alias Bala, said everybody knows them in the Oda township, especially in Zongo as sympathisers of the NDC, but they have decided to quit and join the NPP due to Mahama’s lack of vision for the people of Zongo and the NPP’s good policies, especially for the Zongo community.

“Everybody knows us to be NDC supporters in Oda Zongo. But today, we have decided to leave the NDC and join the NPP for many reasons,” the groups leader said.

“We have realised the NDC have nothing good to offer our Zongos. But we have realised that the NPP, under Nana Akufo-Addo and Dr. Mahamudu Bawumia, are doing so well with good policies for the country and our Zongo. Things are now changing in Zongos.”

Explaining in detail why they have quit the NDC, the group slammed former President Mahama and the NDC for promising to build mortuaries for Zongo communities, describing it as an insult.

“One of the reasons we have left the NDC is the promise by Mahama to buil mortuaries for Zongos. This can’t be a priority. It is an insult.”

The group said they have been impressed by the NPP’s focus on education for the youth of Zongos.

The new defectors said there are many people like them in Oda Zongo and other neighbouring Zongos and they vowed to launch a vigorous campaign for the NPP to ensure victory for President Akufo-Addo to continue with his good policies for the country and Zongo.

LIKE A BABY: The Perfect Peace of a Mind at Ease