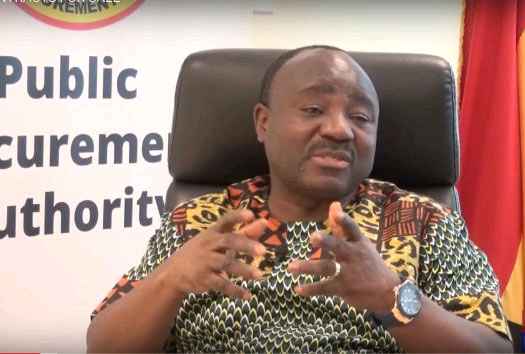 High Court presided over by Justice Mary Nsekyire, has admitted the former chief executive officer of the Public Procurement Authority (PPA), Adjenim Boateng Adjei, to bail in the sum of GHC 5 million with two sureties to be justified.

Boateng Adjei, was arraigned for the first time on Wednesday 25 May 2022, after he was charged by the Special Prosecutor Kissi Agyebeng, on 18 May, for “using public office for profit” and also “directly and indirectly” influencing a procurement process for personal gain.

Adjei, has been charged alongside his brother-in-law Francis Kwaku Arhin, who is facing “one count of using public office for profit”. He also pleaded not guilty and has also been admitted to bail in the sum of GHc 5 million Ghana cedis with no justification required.

Today in court, Adjei pleaded not guilty to all 17 counts after his charges were read to him and the other accused person in open court.

Justice Mary Nsekyire’s court ordered state prosecutor to file all documents and files they intend to rely on for the trial and to make full disclose to the defence team.

The court subsequently adjourned sitting to the 28 May 2022, for the case to take its natural course.

CHRAJ sanctions
The Commission on Human Rights and Administrative Justice (CHRAJ) in February this year disqualified the former CEO of the PPA from holding public office for the next 10 years.

In addition, Adjenim Boateng Adjei has been directed to declare his assets in accordance with the Public Office Holder (Declaration of Assets and Disqualification) Act, 1998 (Act 550) within three months and also refund to the state an amount of GHC5,697,530.00 within six months.

This declaration by CHRAJ follows fresh findings into alleged corruption and conflict of interest in the matter between the Ghana Integrity Initiative (GII) and Boateng Adjei.

The GII petitioned CHRAJ in September 2019 to investigate if the PPA boss and other board members of the PPA acted criminally in setting up a company, Talent Discovery Ltd, which allegedly sold government contracts.