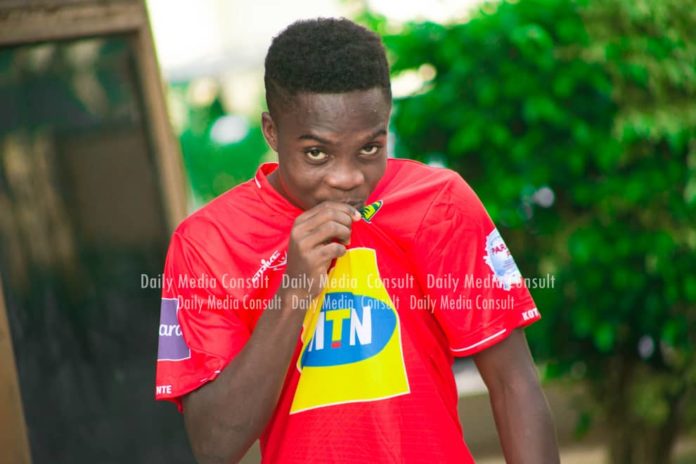 It’s the one big expectation of every Asante Kotoko fan: that almost assured prospect of Ghana legend Asamoah Gyan playing for the Porcupine Warriors as the final leg of a long and legendary playing career.

Time and again, Gyan has expressed that desire and it’s bound to be fulfilled at some point in the not-too-distant future. When he finally gets to put on the shirt of his beloved Kotoko, though, Gyan’s passion would almost certainly exceed what he’d actually be able to contribute. Aged 34 and — if that’s not uninspiring enough — currently playing in India, there isn’t much left in his tank. Gyan might not be able to bring Kotoko his best, yet the forward is offering something better right now in young Matthew Anim Cudjoe, his protégé.

Discovered two years ago during the inaugural edition of Gyan’s now annual Baby Jet U-16 Tournament, Cudjoe is steadily blossoming into a valuable asset for the country. He has already represented the Black Satellites — Ghana’s U20 men’s team — at the 2019 African Games, but it’s only now that Cudjoe is receiving national attention on the scale that his prodigious talent deserves. On the books of Young Apostles FC — run by Samuel Anim Addo, Gyan’s manager — Cudjoe, when deemed ready for his first big step at club level, was offered to Kotoko in a season-long loan deal.

Just a month into that temporary switch, Ghana football’s hottest property hardly looks daunted by the challenge of representing the nation’s biggest club. His professional career has barely taken off, and Cudjoe hasn’t even started a competitive game for Kotoko, but he is shaping up to be — in Gyan’s words — “a massive influence.”

Against Ebusua Dwarfs — one of the four times he has been dispatched as a second-half substitute by head coach Maxwell Konadu in the Ghana Premier League — Cudjoe scored three minutes after his introduction to spark the late rally that would end Kotoko’s two-game losing run. But that cameo, though spectacular, was served to a largely empty stadium.

A week later, when Kotoko visited archrivals Hearts of Oak for their next league game, Cudjoe came on to similar effect, this time before a full house. He didn’t score or assist, but it was Cudjoe’s move — an attempt at goal handled by Hearts defender Mohammed Alhassan — that gave Kotoko the penalty from which Guinean Naby Keita won the derby clash at the death.

In his 20-odd minutes on the pitch, though, Cudjoe offered more than just that match-winning contribution. Twisting through narrow margins and slipping past his markers, the 16-year-old imposed himself on the opposition with his skill-set, yet — as footage that went viral after the game revealed — his mentor, Gyan, had a tip or two to offer on how Cudjoe could improve.

Along with his brother, retired footballer Baffour, the former Ghana captain was seen tutoring the kid on how to evade older and tougher opponents, thereby maximizing his potential. Even so, Cudjoe was the toast of Kotoko’s fans. Long after the game had ended, he went on a lap of honor — not unlike what followed his sparkling debut for Kotoko, also against Hearts, late last year.

This time, though, he had lots to show for it. Beyond, between, and beneath the thick glass walls that separate the terraces from the Accra Sports Stadium’s playing area, appreciative fans slipped many a cedi note to Cudjoe in the manner Phobians at the Carl Reindorf Park had done for Hearts midfielder Emmanuel Nettey days prior — only Cudjoe got so much more cash that he had to fold his shirt into a makeshift pouch to carry all he got. Of course, it wasn’t really about how much money Cudjoe went home with; rather, ponder the significance of such rare expressions of generosity in these hard times.

And it’s a good thing Kotoko faithful do recognize Cudjoe’s worth and hold him in such high esteem. His stay with the club was never meant to be a very long one, anyway, and reports indicate that a future in Europe could be on the horizon sooner, if not later.

If Cudjoe is, indeed, a foretaste of what Gyan would bring to Kotoko someday — and he isn’t, frankly — it feels good, and Kotoko should enjoy him while the preview lasts.

Ghana has experienced no food shortage because of my ‘bold policies’...