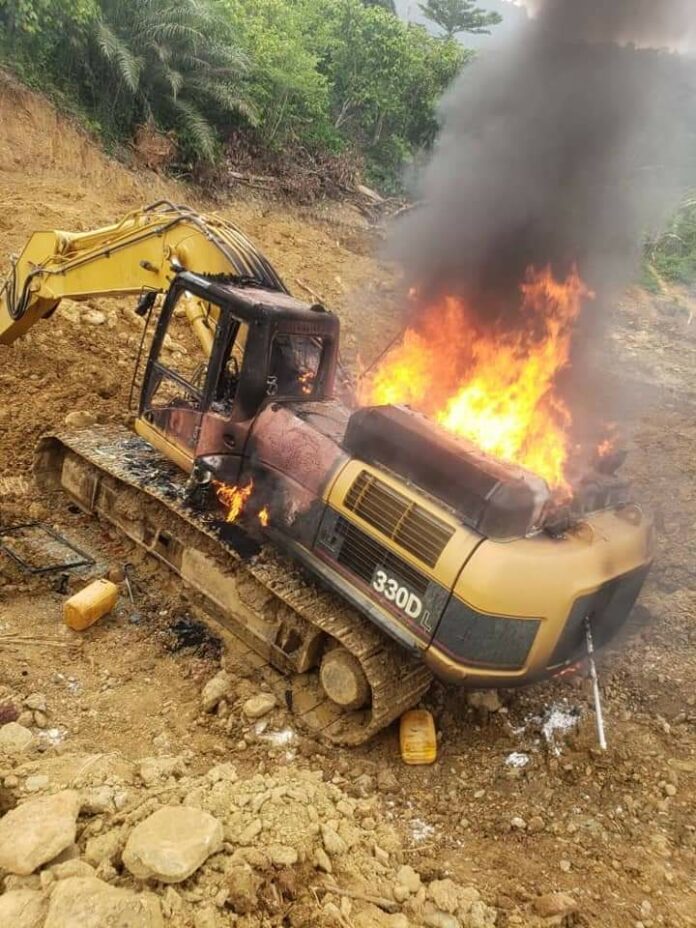 The Ghana Armed Forces (GAF) says its officers deployed to curb illegal mining on water bodies and forest reserves, will not hesitate to destroy all equipment found at illegal mining sites.

The GAF made this known in a statement signed by its Public Relations Director, Eric Aggrey Quarshie.

“These illegal activities were mostly being done in the night or under the cover of darkness protected by armed guards, as used cartridges were found at the sites. The Operation Halt II patrol that accompanies the team was ordered to destroy logistics found in these areas,” the statement added.

A statement from the Ministry of Information said the exercise, dubbed ‘Operation Halt II’, is aimed at “removing all persons and logistics involved in mining on water bodies.”

The second phase of the exercise has seen the burning of excavators and other mining equipment – a move which has been justified by the government.

‘We’ll come after you’

Recently, the Defence Minister, Dominic Nitiwul, warned illegal miners working at night that they do so at their own risk.

He noted that, during the different phases of ‘Operation Halt’, some miners were found to be carrying out their activities at night.

At a press briefing in Accra on Wednesday, Dominic Nitiwul said the military has been equipped to deal with such recalcitrant miners.

“So if you go out there to mine, I cannot guarantee your safety when the soldiers are going to apprehend you. So I will advise you to not go out. It is not worth it.”

He indicated that licensed mining companies operating near water bodies would be treated as illegal miners.

No hand sanitizer? This KNUST product can be of great help

Ghanaians jailed in US for $10m online theft, romance scams