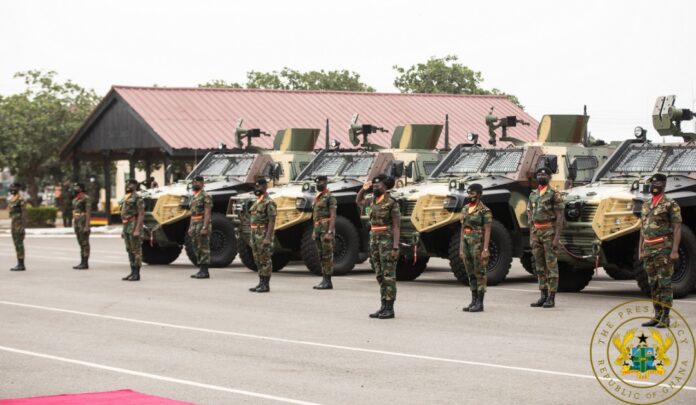 President Nana Addo Dankwa Akufo-Addo has presented 40 armoured personnel carriers to the Ghana Armed Forces, as part of Government’s efforts to retool and equip the military.

Addressing a ceremony at Burma Camp on Wednesday, 31st March 2021, President Akufo-Addo stated that since taking office in 2017, his Government has been working to satisfy the logistical and personnel needs of the Armed Forces.

“I did indicate in my address on that day that there was more to come. As you know by now, a Government of the New Patriotic Party is a promise-keeping one, and I am here to redeem that pledge,” he said.

The President continued, “Today, I am here to present forty (40) Cobra II Armoured Personnel Carriers, which, according to military standards, are very strong and versatile armoured vehicles, and which will help us contain even better the security threats posed at our northern borders, as well as provide the necessary protection for our western and eastern frontiers.”

He commended the Armed Forces for their continued commitment to the on-going Operations CONQUERED FIST and MOTHERLAND, which is intended to create a secure, peaceful atmosphere at the northwestern, northern and northeastern borders of the country.

President Akufo-Addo urged the Armed Forces to continue to collaborate with the Ministries of National Security, Interior, Foreign Affairs and the Ghana Revenue Authority, as well as all relevant ministries and agencies, to ensure that the country maintains a robust disposition that will deter potential aggressors, who may attempt to derail the political and socio-economic gains chalked so far.

“We all know that the rapid economic transformation and accelerated growth that we seek can only be realized in an atmosphere of peace, tranquility and security. I assure you that Government will continue to address your logistical needs, and we will work to provide resources through our re-equipment programme, and help ensure that you are properly equipped to perform your roles effectively and efficiently,” he added.

As an institution noted for its discipline, the President urged them to pay particular attention to the maintenance of the vehicles, “and to use them for the benefit of our country and its people.”