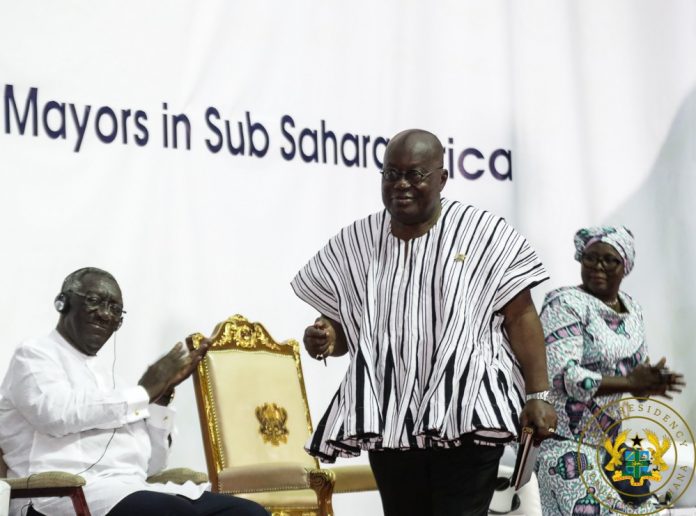 Ghanaian leader Nana Addo Dankwa Akufo-Addo says Ghana is committed to reducing her carbon footprints, and will contribute significantly towards helping to win the fight against Climate Change.

Describing Climate Change as “the biggest threat to the realisation of the SDGs”, President Akufo-Addo explained that the issue has become an issue of grave concern to most leaders across the world, as it has considerable impact on the fundamentals required for survival on earth.

“We, in Africa, suffer the most because our weak economies are most susceptible to the effects of climate change, and our capacity to withstand its damage is low,” he added.

The President was speaking at the 2nd Africa Climate Chance Summit held at the Accra International Conference Centre, on Thursday, 17th October, 2019.

With the Global Report on Climate Economy by the Coalition of Urban Transitions, launched on the sidelines of the 74th Session of the UN General Assembly, stating that “the world faces a climate emergency – but cities offer national governments a solution”, the President stressed that it is in Africa’s interests to fight decisively climate change.

“We need to take practical and proactive steps to curb human activities that are endangering our planet. We need to provide solutions that can stand the test of time in Africa. Our work is cut out for us, and we cannot fail,” he added.

With the Summit bringing together leaders of African cities, President Akufo-Addo explained that Ghana believes that acting on climate change cannot be done in isolation.

“It should be a co-ordinated effort, weaved into the sustainable development agenda of our various nations. The Paris Agreement and SDG Goal No. 13 provide the framework for us to forge ahead in this direction,” he said.

He told the gathering that Ghana’s Nationally Determined Contributions (NDCs) towards combating climate change have been fully incorporated into Government’s Co-ordinated Programme for Economic and Social Development Policies (2017-2024), to facilitate their implementation.

He continued, “We are committed to reducing Ghana’s carbon footprints, and have, thus, taken the decision to increase the renewable energy component of our energy mix to 10%, up from 1%, by 2020. The target is to install 200 megawatts of distributed solar power by 2030 in both residential and non-residential facilities, and in state agencies, in order to reduce Government’s dependence on power generated by fossil fuels.”

Jubilee House, the seat of the presidency, he added, will soon be powered by solar energy, as an example to other institutions or public buildings.

The possibility of using nuclear energy, President Akufo-Addo told the gathering, is being considered, with a nature-based solution also at the heart of Ghana’s climate action.

“We have placed a ban on illegal mining, the phenomenon we call ‘galamsey’, which has been destroying our water bodies, vegetation and our forests. Some twenty thousand (20,000) young people have been employed to help restore our degraded lands, and have, so far, planted trees covering an area of one hundred and ninety thousand (190,000) hectares,” he added.

Major policy interventions such as the programme for “Planting for Food and Jobs”, “One District, One Factory”, “One Village, One Dam”, have been implemented not only to boost agricultural production, industrialisation and rural development, but also to build our resilience to the impacts of climate change.

“I have also established an Advisory Group of prominent, private sector Chief Executives, who are setting up a $100 million SDGs Delivery Fund and a $200 million Green Fund, to complement government’s efforts at tackling climate change, and funding the implementation of the SDGs,” the President said.

He, thus, urged African leaders gathered at the Conference Centre to prioritise climate actions in their local plans.

“Let us take action to reduce carbon emission in our cities, and let us be part of the solution to providing a better future for our children and subsequent generations to come. Implementation and combating the effects of Climate Change must be everyone’s business,” the President added.