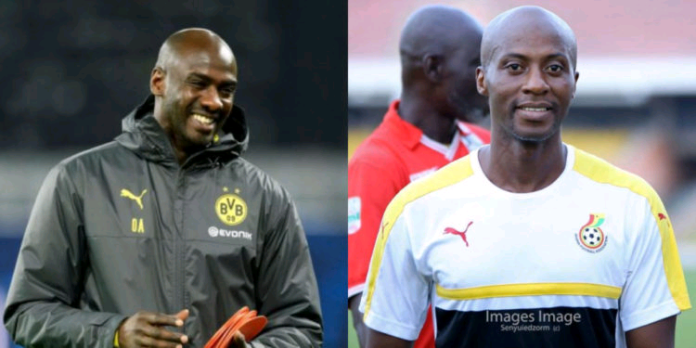 Ghana Football Association have settled on Otto Addo and Ibrahim Tanko as the new assistant coaches for Black Stars ahead of crucial World Cup Qualifiers against Nigeria next month, Dailymailgh.com understands.

Both coaches are set to take up the coaching role following the imminent appointment of Chris Hughton as coach of the Black Stars by the Ghana Football Association.

They are expected to work with ex-Brighton and Hove manager Chris Highton after talks between him and the Ghana Football Association to ensure Ghana’s qualification to the next FIFA World Cup in Qatar.

According to sources, the Football Association preferred Otto Addo as replacement for outgone Milovan Rajevac as head coach of the Black Stars,a decision which didn’t sit well with the Ghana government.

After a meeting with the Sports Ministry and the Irish manager with Ghanaian roots, everything looks set for the former Brighton and Hove Albion manager Hughton to take over the Ghana job.

Black Stars have a crucial game ahead of them next month as they prepare to face rivals Nigeria in March for a place in the Qatar 2022 FIFA World Cup finals.

The Black Stars are hoping to make a fourth appearance at the FIFA mundial after missing out in 2018, a tournament which was hosted in Russia and won by France.

Otto Addo was on the bench as Milovan Rajevac assistant coach when Ghana played Zimbabwe and South Africa respectively.

He was supposed to join the team in Cameroon for the Africa Cup of Nations tournament in but failed to show up following his engagement with Borussia Dortmund in Germany.

Addo is credited for Ghana’s famous 2-2 draw against 2014 World Cup winners, Germany during the 2014 mundial in Brazil and was Ghana FA’s favourite for the job.

However, he’s now being joined by another former Borussia Dortmund player Ibrahim Tanko to assist Chris Hughton, the Irish with Ghanaian descent to steer Ghana to the World Cup in Qatar later this year.

Digitization is key to building systems for Africa’s development – Bawumia