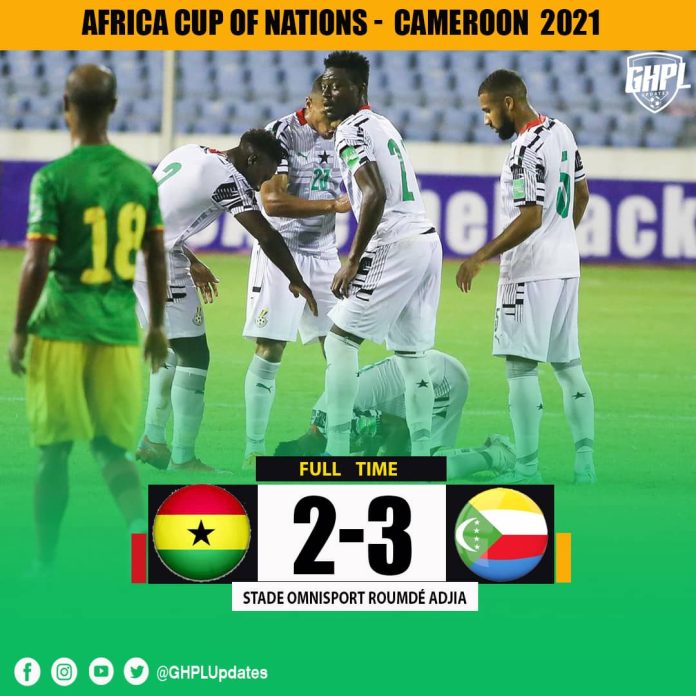 Ghana’s Black Stars finished last in their group stage for the first time ever in the history of the African Cup of Nations tournament.

Before the 2021 Africa Cup of Nations tournament held in Cameroon, the four-time AFCON champions had never come last in their group in the tournament’s history.

Ghana were paired with Morocco, Gabon and Comoros in Group C of the 33rd edition of the Africa Cup of Nations tournament organized by CAF.

Ghana loss their first game against the Atlas Lions of Morocco by a lone goal margin as Sofiane Boufal scored a late goal to break Ghana’s heart.

In the second game of the competition, Ghana took an early lead but got their hearts broken again when Jim Allevinah scored a last-gasp goal to take the win from Ghana at the dying embers as it ended 1-1.

On Tuesday , January 18 n Garoua, Ghana loss to AFCON debutants and a Non-Football Nation, Comoros 3-2 to exit the competition at the group stage.

The Black Stars did not only exit the competition at the group stage but also failed to win a single game at the tournament and finished bottom in the group for the first time in the country’s history.

Ghana’s media need to up their game in covering the presidential...