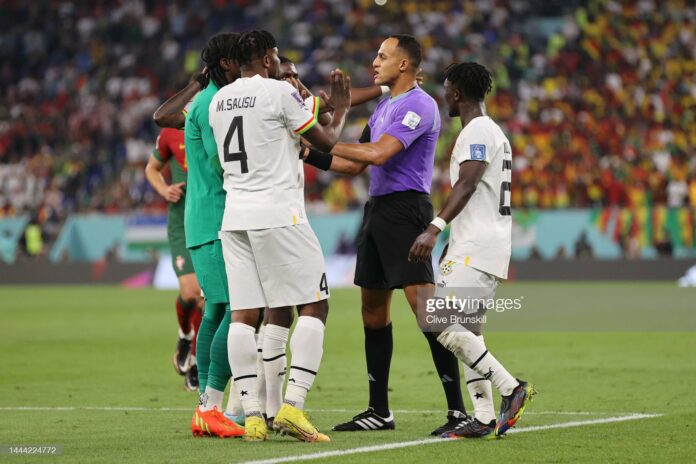 The Ghana Football Association has asked FIFA to look into the disgraceful conduct of Moroccan – American referee Ismail Elfath after he awarded a dubious and an imaginary penalty to Portugal without checking the VAR, Dailymailgh.com understands.

According to our source, the Ghana FA has petitioned the world governing body, asking for sanctions to be taken against the disgraceful decision which has brought the much the famous VAR disgrace.

The Moroccan-born American official refused to have a second look on the VAR monitor and judged Mohammed Salisu’s challenge on Cristiano Ronaldo as a foul and has subsequently become a laughing stock for his bad decisions throughout the second 45 minutes of the match.

The pathetic officiating from the Major League Soccer referee has led to outrage around the world, with many questioning the essence of the Video Assistant Referee (VAR) to reduce such unfortunate incidents.

The dubious penalty awarded to Portugal changed the complexity of the game as Ronaldo became the first man to score in five World Cup as the Europeans were made to sweat to win 3-2 in Doha on Thursday night.

Ghana will play Asian powerhouse South Korea at the Education City Stadium in Al Wakrah at 1pm on Monday in their second group game of the 2022 FIFA World Cup tournament in Qatar.