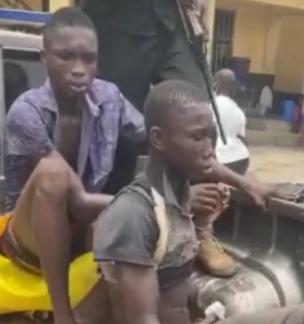 A 10-year-old boy in Ghana has been murdered for body parts to be used in suspected rituals believed to bring wealth, witnesses have told dailymailgh.com.

Two people have been arrested in connection with the crime, local media reported.

The deceased who has been named as Ishmael was lured into an uncompleted building and was hit with an object, killing him instantly, the CNR reported.

Videos widely shared online showed police officers picking some exhibits at the crime scene to ascertain the cause of the horrifying incident.

It was later gathered that some of the angry youth attempted to lynch the suspects but for the timely intervention by the police.

The two suspects aged 18 and 19 have been detained at the Kasoa Divisional Command to assist police investigations.

Belief in witchcraft or “juju” is widespread in Ghana.

Traditional witchcraft practitioners are widely consulted for cures for various ailments and they are said to have magical powers to protect their clients from wide range of misfortunes.

Saturday’s incident has shocked inhabitants of Lamptey Mills, a suburb of Kasoa, who want both suspects face the full rigours of the law.

Ishamael’s mother, Hajia Maame is still in grief. She is shocked by the news of her son’s untimely death.

It is the lastest in a spate of such murders in the Central Region.