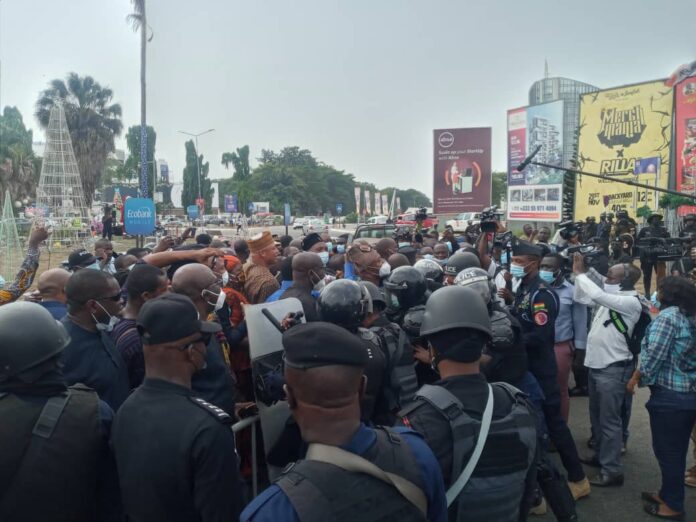 A scuffle broke out between Ghana’s opposition MPs during a march to the Electoral Commission (EC) Headquarters in the capital Accra Tuesday.

Led by the Minority leader Haruna Iddrisu and Minority Chief Whip Muntaka Mubarak, the MPs walked from parliament to petition the EC against the commission’s verdict that declared incumbent Akufo-Addo as president-elect.

But the MPs were prevented from going beyond a barricade around the Ridge Roundabout in Accra as they defied the orders of the police who said they were unaware of any walk by the Minority to the EC offices.

This turned chaotic as the police manhandled some of the MPs including Haruna Iddrisu, according to local media reports.

“This is what the law allows us to do. But Akufo-Addo being the tyrant as he is decided to unleash the police on us”, said Agbodza Governs MP for Adaklu.

“They pushed me, molested me but we are here to do what we wanted to do but did you see any of us attacking the police?”, he quizzed.

“There is absolutely nothing wrong with embarking on a walk to present a petition to any state institution but we find the action of the police very offensive; the police should be providing cover and not acting in such manner”, Kumbungu MP Ras Mubarak said.

The opposition MPs are also challenging the parliamentary results of the Techiman South Constituency in the Bono East region.

They have vowed to boycott a planned engagement with the Jean Mensa-led Electoral Commission.

“We have noted that the chairperson and her officers completely ignored even coming out to take the petition”, Minority leader Haruna Iddrisu said adding: “We will ignore them in parliament”.

Unrest in the West African country started a forth night ago after the Electoral Commission declared incumbent Nana Akufo-Addo as president-elect its December 7 polls.

The Ghana Police Service has however warned the public against unlawful gatherings and demonstrations following the declaration of the results.

According to the police, such gatherings without prior notification amount to a breach of the Public Order Act, 1994 (Act 491).

This can lead to various penalties “including imprisonment,” police have warned.

Police arrested 30 persons for demonstrating at the headquarters of the EC in Accra.