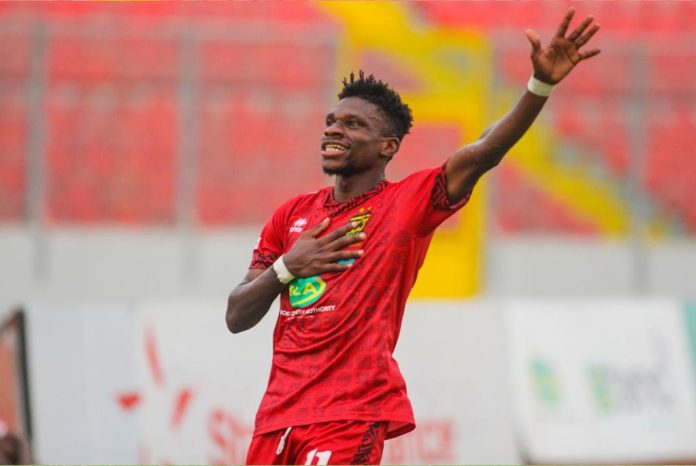 The Porcupine Warriors started the game on a high pace and pushed the away team into their own backyard with high pressing game and possession.

Kotoko’s blistering start to the game paid a dividend when striker Franck Mbella Thierry Etouga opened the scoring in the third minute of the match to put the hosts 1-0 up under five minutes.

The Cameroonian controlled a fine pass inside the box before hitting it with his left foot to open the score and put Kotoko in the lead.

The away team could hardly come out from their own backyard which gave the hosts a chance to continue attacking them.

Just before the half time whistle, the home team were awarded a spot kick which was converted by the Cameroonian to make it 2-0.

Into additional time period of the first half, Lions got themselves a spotkick as Kelvin Kyei took responsibility and scored to reduce the deficit to one before the break.

Inside the 84th minute mark, the Cameroonian scored again to complete his hatrick toggive the Porcupine Warriors a breathing room withssix minutes left on the clock.

Kotoko won the game 3-1 and are six points above Bechem United with a game in hand.

Bawumia will make Ghana a paradise as president – PC Appiah-Ofori

‘I dribble like Neymar and Mbappé’ – Ghana target Nico Williams