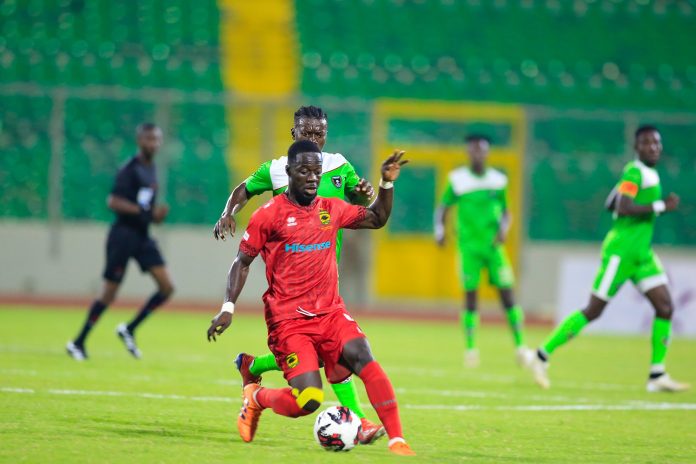 The Porcupine Warriors played very well and dominated the game and stamped their authority early in the game with some great play on the evening at the Baba Yara Stadium in Kumasi.

Samuel Boateng scored a great goal with his weaker left foot at the edge of the box into the bottom right corner with a blistering strike following a beautiful pass from Mudasiru Salifu.

Imoro Ibrahim nearly made it 2-0 as his free-kick took an awkward bounce in front of the Wonders goalkeeper who managed to put the ball behind for corner.

Razak Abalora nearly gifted the visitors the equalizer at the end of the first half but the upright saved his blushes as the first half ended 1-0 to the home team.

New sensation, Isaac Oppong went past his maker with cheaky ease after a beautiful pass from Fabio Gama to finish off brilliantly to make the final score 2-0.

Kotoko have won all four matches this season and sir top of the league table after four matches with 12 points scoring 8 and conceding just 1 in the process.

The Porcupine Warriors travels to Anyinase next weekend to face Karela United FC.

Techiman XI Wonders host Elmina Sharks FC next weekend at the Ohene Ameyaw Park in Techiman still in search of their first win of the season.

Free SHS is most people centred policy in Ghana’s history –...