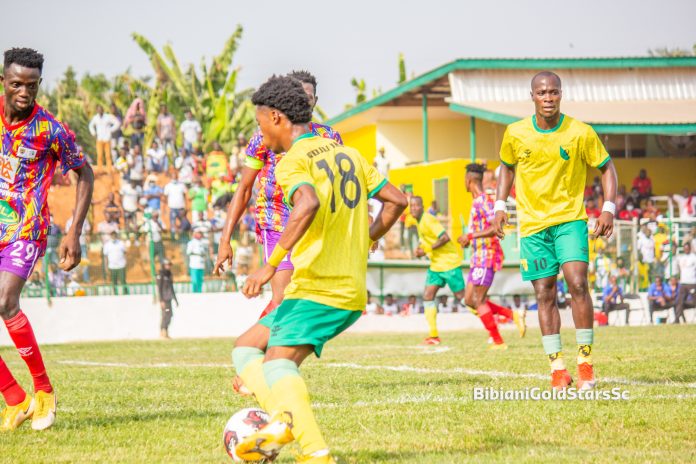 The Phobians picked their second away win this season with a crucial 1-0 victory over the Green and Yellow Miners to return to winning ways.

Gold Stars took the game to the Phobians very early and created some half chances in the opening exchanges of the encounter.

Nonetheless, it was the visitors who struck first through defender, James Sewornu right after the half hour mark to give the travelling Fans something to chear about inside 30 minutes.

Striker, Daniel Afriyie Barnieh weaved his way into the area of the opposition defense and laid a beautiful pass to Sewornu who scored with a thunderous strike to make it 1-0.

Barnieh nearly made it 2-0 to the Phobians after a dazzling run from Kojo Obeng Jnr but his effort was saved by the goalkeeper resulting in a corner kick which was wasted.

The second half was more of Gold Stars pressing the Phobians and pushing them into defending with a high intensive display searching for the equalizer.

Striker, Kwabena Owusu probed and probed but his effort was not enough to get his side at least a point as Richmond Ayi saved his point Black effort.

The game ended 1-0 to hearts of Oak to 7th on the league table after 10 matches with two games in hand on 17 points with Gold Stars left on 13 points.

Hearts of Oak will face Techiman XI Wonders FC at the Accra Sports Stadium on next week Sunday while Gold Stars goes up north to face Real Tamale United.

North East: Your leadership is sterling – Overlord to Akufo-Addo