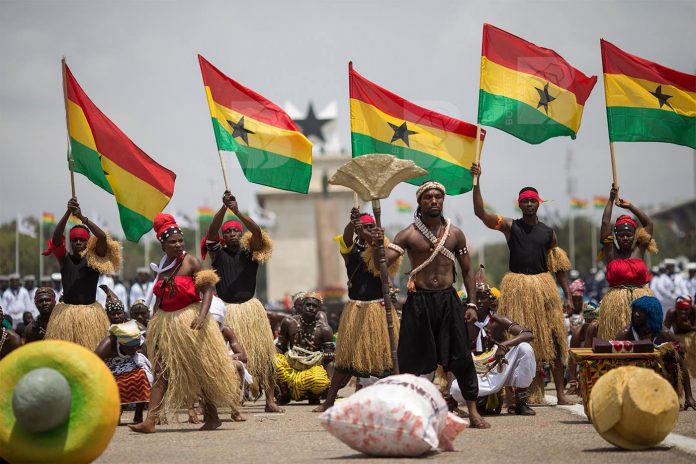 Ghana has been ranked the most peaceful country in West Africa and fourth on the continent in the latest Global Peace Index.

Ghana placed 44th in the world.

Botswana topped the continent with Malawi picking the second spot in the ranking.

Iceland held its position as the most ‘peaceful’ nation on Earth in the 2019 Global Peace Index.

In addition, the world’s overall ‘peacefulness’ has improved for the first time in five years – although only marginally.

Afghanistan was bottom of the list, moving below even Syria, while South Sudan, Yemen and Iraq were all in the bottom five.

The report measures the ‘peacefulness’ of 163 countries with a range of measures including military spending and deaths from conflict and terrorism, as well as an estimated economic cost of violence.

Iceland, often portrayed as an idyllic Nordic paradise, came first in the rankings for the 12th year in a row as researchers praised the country’s falling murder rate and increase in funding to UN peacekeeping.

‘The strong institutions, attitudes and structures of peace that Iceland maintains has bolstered the country’s resilience against small internal shocks,’ they said.

New Zealand came second, as the report’s authors noted the violence of the Christchurch mosque attack but said the country had improved other scores and developed a ‘resilience’ to cope with such disasters.

Portugal was third, and Austria fourth despite an increase in ‘likelihood of violent demonstrations’ after a far-right party joined the government.

Denmark was fifth, with European nations dominating the top of the list.

‘Europe remains the most peaceful region in the world and it recorded a very slight improvement in peacefulness after several years of deterioration,’ the report said.

‘However, despite these improvements, the broader political environment in Europe remains uncertain, and resurgent nationalism and terrorism remain significant threats to peace.’

Brexit was also mentioned, as researchers said the UK ‘continues to struggle with its plan for exiting the European Union’ in what they called a ‘mixed’ year for international relations.

Germany was 22nd, the United Kingdom 45th and France 60th, while the United States dropped four places to 128th.

The report’s authors cited ‘growing political polarisation’ in America, adding that tensions had grown between Washington and Iran.

‘Confidence in US leadership has fallen the most in the past five years, with people now having more confidence in China than the US on average,’ they noted.

Afghanistan was bottom, scoring even worse than Syria, where ISIS was swept out of its last patch of territory earlier this year.

‘Despite the improvement this year, the world remains considerably less peaceful now than a decade ago,’ the report’s authors said.

‘A wide range of factors drove the fall in peacefulness over the past decade including increased terrorist activity, the intensification of conflicts in the Middle East, rising regional tensions in Eastern Europe and northeast Asia, increasing numbers of refugees, and heightened political tensions in Europe and the U.S.,’ they explained.

The slight uptick in peacefulness this year was partly fuelled by a reduction in military spending, the report found.

Seventy-two of the countries studied had reduced their level of military expenditure as a share of GDP.

There were also particular regional improvements, including in North Macedonia which struck an agreement with Greece to settle the long-running name dispute between the countries.

There was also an easing of the conflict in Ukraine, where fewer lives were lost.

Not all countries were included in the rankings, with small European nations such as Luxembourg and Liechtenstein among those left out.

The full list of countries in the 2019 Global Peace Index

155. Democratic Republic of the Congo