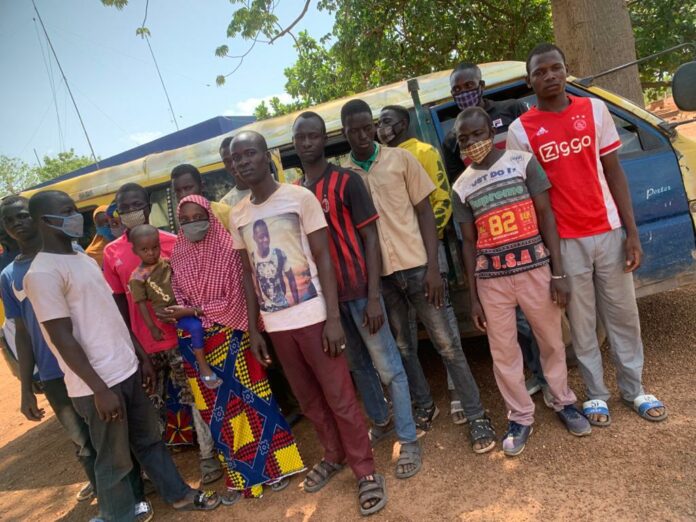 Authorities in Ghana have arrested 26 migrants during a routine operation at separate unapproved routes along neighbouring Burkina Faso, according to Immigration officials.

Led by a team of officers of the Ghana Immigration Service, 19 Burkina Faso nationals were arrested on the Gwollu stretch, about 807 km from the national capital Accra.

The migrants comprising 13 males and six females were seized while onboard a Wa-bound Hyundai bus with registration number GS 4763 -12 at about 12:18 GMT on Wednesday, June 9, 2021.

“Our investigations revealed that the migrants were economic migrants journeying to Ghana for farming and other labour activities.

“They were screened by health personnel before being handed over to the Burkina Faso authorities on the other side of the border,” he said in a statement Thursday.

The statement also confirmed another arrest of some seven Burkinabe on the Hamile stretch of the border.

The all male migrants were onboard a Metro Mass Transit bus to Sunyani.

The GIS spokesperson in the Upper West Region said they have since been repatriated through the Hamile border post.

Burkina Faso has been gripped by a deepening security crisis that has spread across the western part of the Sahel region in recent years, causing one of the world’s most acute humanitarian crises.

The development has forced many to flee for safety.

But the GIS spokesperson said: “The public is therefore reminded that the Presidential directive on our land border closure is in full force.

Duffuor pay us our 12 months’ arrears; we are suffering –...