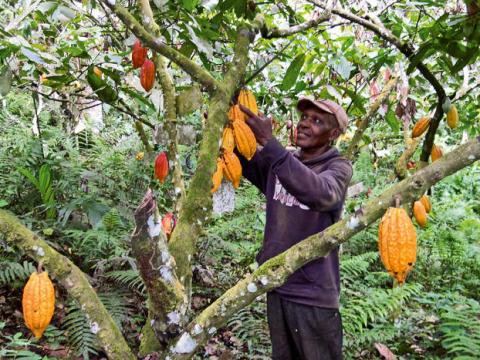 The government of Ghana is to pump $600 million as stimulus package into the cocoa sector.

The Akufo-Addo administration acting through Cocobod is injecting the capital through a Cocoa Productivity Enhancement Program which will among other things step up Ghana’s production to 1.5m tones by 2027.

The stimulus will target rehabilitation of plantations, improvement in storage and domestic processing, stimulation of local consumption as well as efforts to increase output on farms among others and spans a 7-year period, according to the Information Minister Kojo Oppong Nkrumah.

“The Administration believes that Cocoa, being a major pillar of our economy cannot be allowed to survive at its own pace. Cocoa farmers who have been the backbone of the Ghanaian economy already have good news for 2020 in cocoa price structure but now get an additional dose through this stimulus package,” Oppong Nkrumah told the press on Sunday.

Ghana and Ivory Coast are the world’s largest producers of cocoa. In June this year cocoa prices rose sharply after the two countries threatened to stop selling their production to buyers unwilling to meet a minimum price.

The threat pushed the September forward contract for the commodity, listed in New York, to $2,540 a tonne, up 1.4 percent on the day.

The two African nations, which together account for 60 percent of the world’s cocoa production, summoned buyers to Accra for a two-day meeting demanding a price of $2,600 per tonne.

At the end of the meeting, Joseph Boahen Aidoo, chief executive of the Ghana Cocoa Board, told a news conference that their demands had been accepted in principle by the participants, but that there would be a follow-up meeting to work out how to implement the agreement.
“Ivory Coast and Ghana have suspended the sale of the 2020/2021 crop until further notice for preparation of the implementation of the floor price,” he said.

“Over the years it has been the buyers who have determined the price for the suppliers.”
Earlier, on the sidelines of the meeting, the chief of Ivory Coast’s coffee and cocoa council, Yves Kone, said the industry needed a price that amounted to “a decent compensation” for workers’ efforts.

The world’s chocolate market is worth around $100 billion, of which only $6 billion go to cocoa producers.

But Casper Burgering, commodities analyst at ABN Amro, told AFP that the current price rise may turn out to be temporary, as supply was more than sufficient to meet world demand.
Another analyst, at Commodafrica in Paris, said however that drought in Ivory Coast could lead to a shortfall in the coming cocoa harvest, putting upward pressure on prices.

Agyapa deal was to serve a few – Amidu

Ghanaians will continue to enjoy stable and reliable power supply –...