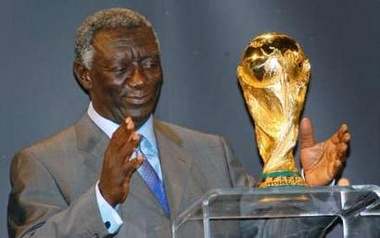 Ex-Ghana President, John Agyekum Kufuor says football fans talks too much about the financial rewards paid to the Black Stars.

He urged the fans to support the team to deliver rather than lambasting them for the monies paid to the Black Stars players.

Few months ago, football loving fans lashed at the Sports Ministry for agreeing to pay each Black Stars player an appearance fee of $20,000 for featuring at the 2021 Africa Cup of Nations, considering Ghana’s poor showing in Cameroon.

Despite the backlash, the former Ghanaian leader Kufuor, who is a former Chairman of Asante Kotoko, says patriotism should not be used as a yardstick to deny the Black Stars players their financial reward, since modern football is big business, where players being the main actors are well rewarded financially.

“Football has become business. The players, many of them are playing internationally and well paid by their teams,” ex-President Kufuor told Accra based Peace FM.

“I’m not saying Ghana should compete with these clubs but the point is, since the game depends on these individuals it should be in the nation’s interest to give them good care.”

“When we give them bonus, we tend to talk too much. You hear them say why is one player taking $5000? We should treasure these youth, who come in to play for us,” he concluded.

Ghanaians Football fans have particularly criticized the FA and government for paying such huge amount of money to the players whiles Ghana’s last success came in 1982.