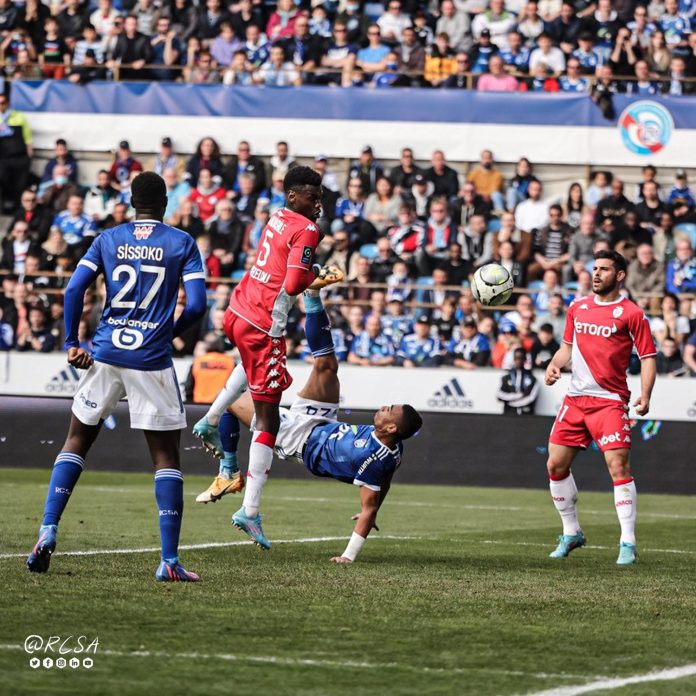 Ghana’s defender Alexander Djiku scored his first French Ligue 1 goal of the 2021/2022 season for Strasbourg on Sunday, 13 March 2022, against Monaco at the Stade de la Meinau.

The Ghanaian international defender scored from a wonderful and a sensational bicycle kick after a scramble following a corner which was headed into his path by Kevin Gameiro.

It was Djiku’s second goal for the club since joining them three seasons ago from relegated Caen and it was all his side needed to secure a vital home win to move into the UEFA Champions League places in the French top-flight.

The 27-year-old centre back is expected to feature for Ghana in this month’s 2022 FIFA World Cup final playoff against Nigeria.

Djiku made a huge impression at this year’s Africa Cup of Nations in Cameroon despite a shambolic display by the Black Stars and could be very vital for Ghana when they play Nigeria later this month.

RC Strasbourg Alsace are third temporarily which is a UEFA Champions League playoffs spot for the main time but could be overtaken by Kamaldeen Sulemana’s Stade de Rennes if they manage even a draw at Olympic Lyon later.

The 27-year-old Ghana center-back has now opened his goal account in the 2021-22 French Ligue 1 season for Strasbourg in 22 matches.

Djiku, who impressed throughout the game was the highly rated player on the field with a rating of 8.3.