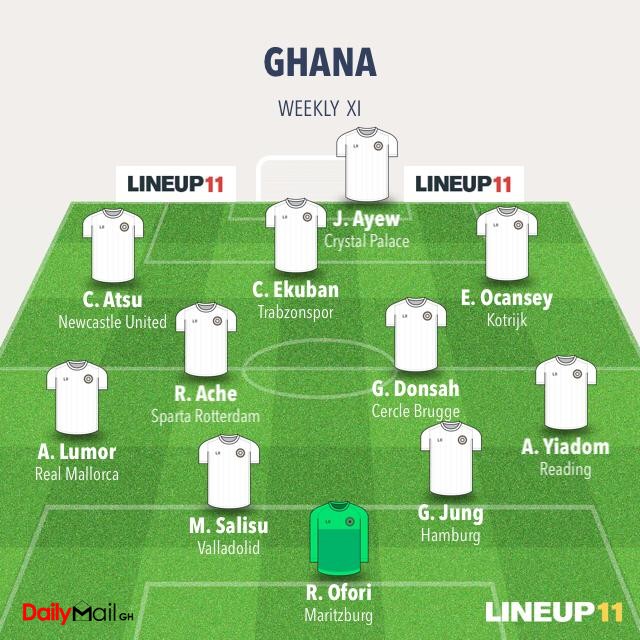 The Ghanaian shot stopper was in his elements at the Harry Gwala Stadium as he pulled some fantastic saves against Stellenbosch. Ofori was able to keep a clean sheet as the game ended goalless.

The marauding right back had another decent game as his side went away to defeat Huddersfield 2-0. Yiadom defended gallantly and often burst forward on the flanks in full force to support the attack. He started as a right-wing back in a 3-4-3 formation but following an injury to Matt Miazga in the 12th minute, Reading reverted to 4-4-2 with the Ghanaian dropping to a right back role.

The newly promoted La Liga side lost by a goal to nil to Real Sociedad but the on loan Ghanaian defender was very composed at the left rear with some great ball distributions.

It was a top notch performance from Jung in the heart of the Hamburg  defence as they went to a dreaded stadium to defeat Karlsruher by four goals to two. The talented central defender was instrumental in the game with some superb tackles as his side cruised to a famous win.

The 20-year-old central defender was not over run by the occasion as he put up a wonderful performance against giants Real Madrid at the Santiago Bernabeu. Salisu who is gradually cementing his place in the Valladolid side was equal to the task and put the brakes on the Madrid attacking force as the game ended 1-1.

It was a great debut for Godfred Donsah as his team Cercle Brugge recorded a 1-0 win over Waasland Beveren. The midfield anchor sat in front of the back four and did all the dirty work in the 73 minutes he lasted on the field.

The fleet footed winger was a handful for the Standard Liege defenders. They could not track him down as he caused serious problems. Ocansey netted the opener for his side in the 34th minute only for Liege to equalize in the 82nd minute and went on to win on the stroke of full time.

The German-born Ghanaian was the engine of the Sparta midfield as they went away to draw 2-2 with PEC Zwolle. It took Ache just eight minutes to open the scoring and was the driving force behind his team throughout the game.

Ayew was the lone ranger up front for the Eagles as they recorded their first win over Manchester United in three decades. The Ghanaian striker netted the opener with a lovely finish in the 34th minute after being set up by fellow country man Jeffrey Schlupp and remained a threat to the United back line before being replaced by Christian Benteke in the 75th minute

After hitting a hat-trick on Thursday in the Europa League away at AEK, Ekuban had another great game against Yeni Matalyaspor in the domestic front. He played just behind Alexander Sorloth in attack and was superb as his club won 2-1.

The Ghanaian winger was called into duty in the 17th minute replacing Saint-Maximin who pulled a hamstring.  It took the Ghanaian international just ten minutes to make an impact as he set up Joelinton in the 27th minute with a fantastic pass for the match winner against Tottenham. Atsu could have netted a brace but he failed to control a superb ball as he was played through late in the second half. He also gave Joelinton another superb pass for what could have been the second goal but the Brazilian fluffed his effort.

Laughter in the time of a pandemic: why South Africans are...