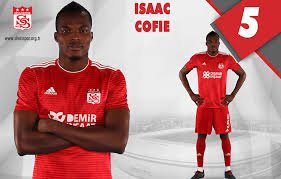 Ghanaian international midfielder Isaac Cofie of Turkish top-flight side Sivasspor has been snapped by Arthur Legacy.

The announcement of the resigning of the former Genoa and Sporting Gijon midfield anchor was made public by the agency through their Twitter handle.

Arthur Legacy is a football agency owned by renowned Ghanaian FIFA Intermediary Oliver Arthur who has over 30 footballers abroad and the brain behind the Calcio Trade Ball Event which celebrates Ghanaian players all over the world.

The agency manages the careers of several Ghanaian players in the diaspora with notable ones in Europe including the likes of Black Stars midfielder Afriyie Acquah of Malatyaspor in Turkey, prolific attacker Richmond Boakye-Yisdom of Serbian giant Crvena Zvezda FK, Armed Awuah of Parma and Philip Yeboah of Hellas Verona both in Italy and a host of other players.

Arthur, who happens to be the owner of the agency, was responsible for the transfers of Gaziantep FK star Yussif Chipsah Raman and Godfred Donsah of Italian side Bologna from Ghana to Europe and also facilitated Cofie’s deal to Genoa.

The celebrated Ghanaian agent also promised to unleash something big about Ghana’s midfield enforcer Acquah in the coming weeks.