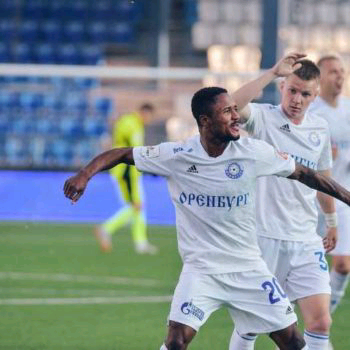 Ghana’s Joel Fameyeh dazzled and bagged a stupendous hat-trick for FC Orenburg in Russia on Saturday afternoon against Tekstilshchik Ivanovo.

The Black Stars striker took his goal tally to 14 this season with his hat-trick in Orenburg’s 5-2 win over Tekstilshchik Ivanovo on the road as they’re close to gaining promotion.

The home team took the lead through Khachim Mashukov after 22 minutes with a beautiful strike to put the visitors under pressure.

Ten minutes to the end of the first half, Ghanaian international Joel Fameyeh grabbed the equalizer for the away to level matters but Mashukov scored again to make it 2-1 at the break.

Fameyeh grabbed the equalizer again for the the visitors two minutes after the hour mark to make it 2-2 before his side made it 3-2 two minutes later with a nice finish from Danila Khotolev.

The former Asokwa Deportivo SC striker grabbed his first league hat-trick this season on the 65th minute mark with a good finish.

The 24-year-old Ghana star has 15 goals and 6 assists in 25 matches this season in the Russian National Football League as his team is a point away from promotion.