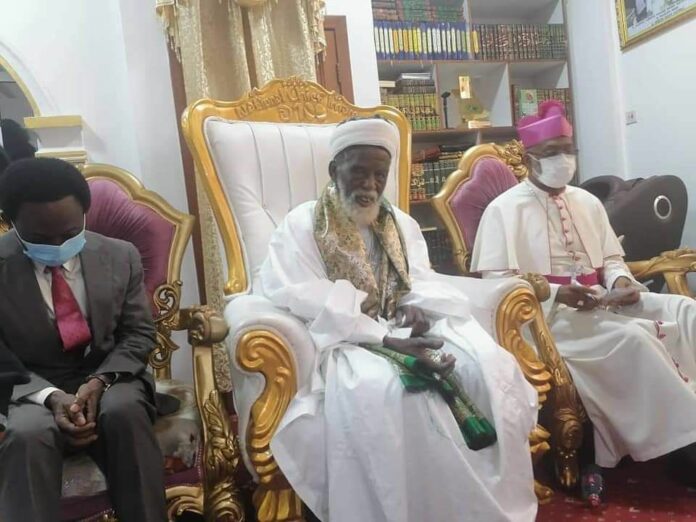 The supreme leader of the Islamic community in Ghana Sheikh Osman Nuhu Sharubutu has on Thursday made a donation of GHC50,000 (US$8000) to help in the construction of a National Cathedral for Christians.

The cathedral is a personal project spearheaded by the nation’s president Nana Akufo-Addo at a cost of $200 million (169 million euros). He said it is a pledge he made to God after his 2016 election victory.

Ghana’s national chief imam made the donation when the board of trustees for the National Cathedral project paid a courtesy call on him at his office.

The board of trustees of the National Cathedral Secretariat has rolled out the “Ketewa Biara Nsua” initiative to raise half of the US$200 million needed to build the edifice. Ghanaians are being encouraged to make a GHC100 donation towards the project.

The Vice-President, Dr Mahamudu Bawumia, has also urged Ghanaians of all religious persuasions to voluntarily contribute to the construction of the National Cathedral.

Plans for the construction of a National Cathedral continues to generate lively debate, and although the government insists it will be funded by the private sector and serve as a multi-purpose national edifice, some have raised concern about its usefulness and cost.

Speaking at the Adabraka Official Town branch of the Presbyterian Church of Ghana on Sunday 22 August 2021, Dr Bawumia underscored the importance of the Cathedral, and urged all to help build it “for Ghana and for the glory of God.”

“As you all know, there are efforts to build a National Cathedral. It is very important that we build the Cathedral. It is a voluntary exercise; anybody who wants to contribute can contribute. I have contributed, and I will contribute some more. So I encourage everybody to think about it, and let’s build it. It is not for anybody. It is for Ghana and for the glory of God,” he said.

A voluntary, national contribution for the construction of the Cathedral would further cement Ghana’s standing as a religiously-diverse country living at peace with itself.

“Ghana is Africa’s second most peaceful country, with adherents of many religions living and working together to build the nation. The construction of the Cathedral would be add further to our enviable record of peaceful co-existence,” he said.

The president Nana Addo Dankwa Akufo-Addo, accompanied by senior members of the Clergy, laid the foundation stone for the Cathedral on 5 March 2020 to signal the start of construction. A National Cathedral Secretariat has since been set up to raise funds from individuals and the private sector for its construction, while work continues apace.

The cathedral will house a series of impressive chapels, a baptistery, a 5000-seat two-level auditorium, a grand central hall, music school, choir rehearsal, art gallery, shop and multi-use spaces. It will also be home to Africa’s first Bible Museum and Documentation Centre, dedicated to Christianity and nation-building in Ghana.

Duffuor pay us our 12 months’ arrears; we are suffering –...