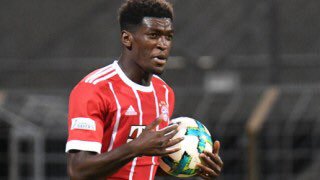 Ghanaian attacker Kwasi Okyere Wreidt had a hat-trick for German record winners Bayern Munich’s junior side against Preussen Münster in the Bundesliga III.

The 25-year-old became the first Ghanaian to score a hat-trick in the Mia-San-Mia outfit.

Wreidt took five minutes to get on the score sheet with a nice and followed up with a routine striker’s goal in the 32nd minutes before completing his hat-trick three minutes to half time.

The Ghanaian attacker continued with his ever growing goal scoring prowess this season and has eight goals to his credit this season as Bayern ll thrashed Preussen Münster by 4-1 away from home.