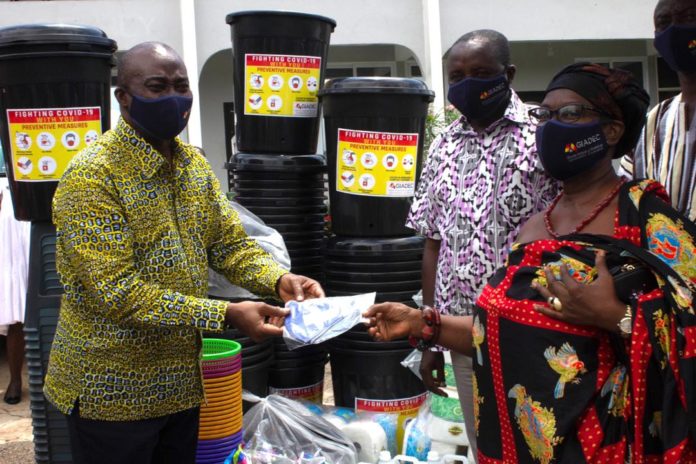 The Ghana Integrated Aluminum Development Corporation (GIADEC) has given a further boost to the coronavirus fight by donating hygiene items to people of Kyebi and surrounding communities of the East Akim Municipal District in the Eastern Region. The items which include quantities of veronica buckets, gallons of alcohol based hand sanitizers, disposable hand towels, nose mask and dust bins were presented to the locals as part of efforts to mitigate the spread of the novel coronavirus in the country.

Speaking at the donation ceremony, the Chief Executive Officer of GIADEC, Mr. Michael Ansah reiterated GIADEC’s commitment of continuous support in the fight against the virus and urged the beneficiaries to use the hygiene items judiciously.

“With the outbreak of the pandemic in Ghana, we at GIADEC believe in formidable partnerships and so the little we can do to help curtail the spread of the virus is by distributing these PPEs to the people of Kyebi and its neighboring environs so that they can protect themselves from the virus. We have decided on the list of communities that will receive this donation and we will also engage the locals in the distribution process so as to make sure that everybody is better protected so that we can be able to defeat the virus” he said

The Municipal Chief Executive of Abuakwa South Hon. Kojo Ofori-Safo who was also present at the event lauded GIADEC for recognising the need to provide such hygiene items as the fight against the virus intensifies. He also admonished the corporation to do more engagement and allow stakeholders to have an input in mining activities in their various localities.

The Okyenhemaa, Nana Adutwumwaa Dokua called on all locals to join hands to support GIADEC in its operations for the benefits of all. The Abontendom hene of Akyem Abuakwa traditional area who doubles as Kyebi Chief, Osabarima Kwabena urged locals to supports projects initiated by GIADEC as they intend to provide great value to beneficiaries of these projects.

GIADEC was established in 2018 through an Act of Parliament primarily to promote and develop Ghana’s Bauxite Reserves and downstream industry.
Highlighting the role of GIADEC in making sure that communities within which they operates is protected Mr. Ansah noted that the corporation implores technology that would not cause havoc to the environment but will bring improvement and protect the natural resources.