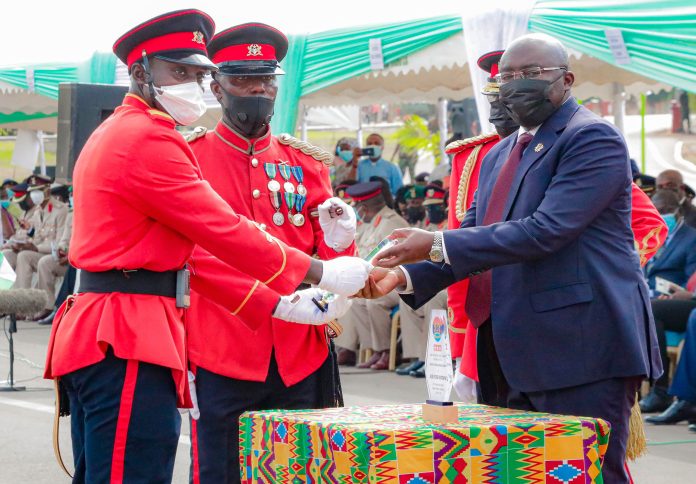 The Vice-President Dr Mahamudu Bawumia has said the government is investing and will continue to invest heavily in the Ghana Armed Forces (GAF).

He said the aim is not only to bring GAF at par with other reputable armed forces in the world, but also to sharpen their readiness to protect the nation against the growing threats in the West Africa sub-region.

Speaking at the graduation ceremony for Short Service Commission and Special Duties Course 59 at the Ghana Military Academy and Training School (MATS) at Teshie in Accra on Friday (17 December), Dr Bawumia said the peace in the sub-region continues to be assailed by a myriad of threats, and government will continue to provide the necessary logistics to the Armed Forces for the protection of the country’s borders.

“Parts of our sub-region are engulfed by terrorism and embroiled in various forms of deprivation, unrest and violence. Ghana’s northern frontiers are seriously threatened, calling for a comprehensive approach to state security.

“Thus, government has commenced the strategic expansion and modernization of the Ghana Armed Forces in line with the threat analysis and matching these with the acquisition of the requisite equipment, logistics, infrastructure development and increase in manpower,” he said.

Dr Bawumia added: “The expansion has already seen the creation and the establishment of the Army Special Operations Brigade, Armoured Brigade and 2 Mechanized Battalions. The Bundase and Daboya Training Camps have been improved with the construction of new accommodation and training infrastructure to enhance training and learning.

“Additionally, the Government is constructing Eight Hundred and Thirty-Two (832) accommodation units for the Ghana Armed Forces which are currently at various levels of completion in all the Garrisons.

He continued: “In the same vein, the government intends to equip the Ghana Navy with Offshore Patrol Vessels and Fast Patrol Boats to counter piracy and other maritime threats and protect our Exclusive Economic Zone (EEZ).

“All these investments are to ensure that the Ghana Armed Forces are well equipped and motivated to deliver on its mandates of safeguarding the peace, integrity and security of the nation and maintaining Ghana’s contribution to international peace and security.”

The quality of training and other logistics are also receiving heavy investments, Dr Bawumia disclosed.

“Aside the renovated Officer Cadets’ Mess and the Academy Parade Square which were completed and commissioned by the President of the Republic on 13 November last year and have since been fully operational, the 320-seating capacity two-storey Classroom Block is completed whilst the magnificent Administration Block is 95% complete.

Bawumia, before conferring the Presidential Commission on the Graduating Officer Cadets, reminded the graduands that the interest of the nation should always be paramount in their conduct during their entire careers.

“In view of this, you need to uphold professionalism at all times. You are always reminded that patriotism, discipline and responsiveness to operational exigencies are essential and the nation expects nothing less from you.”