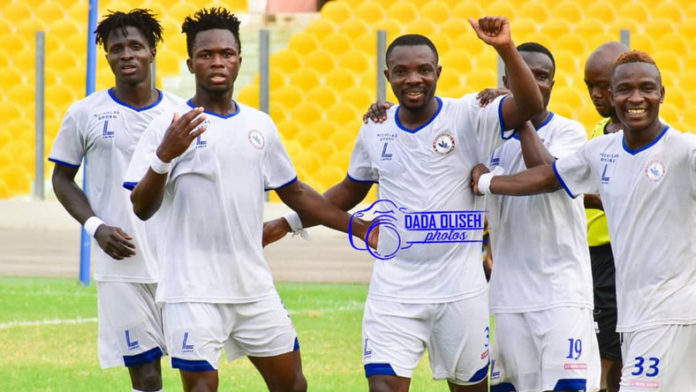 The 2019/20 Ghana Premier League calendar is at what, only a season or so ago, would have been the halfway stage.

With the inclusion of two more teams in the current format, however, the 15-game mark now reached doesn’t quite represent the mid-point yet (four clubs remain a matchday shy of that tally, note).

Still, the suspension of all football activities due to the novel coronavirus disease (COVID-19) outbreak presents a fine excuse to review the various clubs’ performances thus far.

Berekum Chelsea were the season’s early pacesetters, making one bold statement after another. Winning four of their first five games — including daring victories away to Hearts of Oak, Asante Kotoko, and Ashantigold — Chelsea didn’t concede until their sixth game when leaders and regional rivals Aduana Stars made the short trip from nearby Dormaa. With that breach of a rather tight defence, however, the goals came in thick and fast. Chelsea have now let in 14, but remain in the hunt for a second league title.

Well, where to start from?
Accra? Kumasi? Obuasi?
I’ll probably go for the latter. The Len Clay Stadium has lost some of its awe-inspiring aura in recent years, but Ashantigold remain pretty solid at their fortress. Like Chelsea, Ashgold had begun the season well, winning three games and drawing one — until the blistering Blues came to town and burst that bubble with a third consecutive league victory that underlined their title credentials.

Chelsea have shown just how vulnerable some clubs could be at home, but they’ve been served the same pill by two guests. WAFA are the latest, but Inter Allies, arguably, did it best. Undone by poor goalkeeping — the one game loanee Danlad Ibrahim didn’t start, incidentally — and a Victorien Adebayor show, Chelsea fell with a resounding thud.