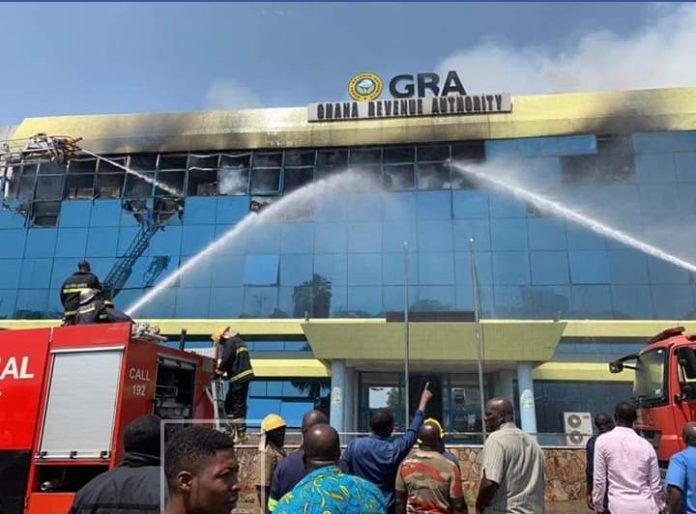 The Ghana Revenue Authority (GRA) has denied reports a whopping amount of GHC 147 million has been lost to fire at its head office annex on Sunday.

The GRA Board Chairman, Professor Stephen Adei, speaking to the media at the scene said all vital documents have been secured despite the devastating nature of the inferno.

Prof. Adei said business will commence on Monday as usual since the GRA has a safe backup system in place.

Four persons have been injured in the blaze that hit the Ghana Revenue Authority (GRA) office in the Accra.

The injured including a soldier and a firefighter are being treated at an undisclosed hospital nearby.

They were part of an emergency response team that rushed to the fire scene that ripped through several offices in the GRA building located close to the Kwame Nkrumah Interchange.

Two others, who are yet to be identified have also been sent to the hospital, the Ghana Red Cross indicated to reporters.

Officials are still tight-lipped about the development as firefighters and other security forces battle the Sunday morning blaze which started at about 8am local time.

The scene has since been cordoned off cutting access to roads leading to the Central Business District —as police feverishly control traffic.

Reports suggest the Archives Department of the GRA was the first to be attacked by the fire.

Eyewitnesses have, however, blamed the Ghana National Fire Service of delayed response, worsening the situation.

“So as I stood here the Fire Service had spent about an hour before they could do something. They appeared clueless and I think their action worsened the situation”, an eyewitness said.

“There are people whose relatives work here and they may be aggrieved. But when we got here we had to assess the situation before we take action. As we speak to you the situation is under control, said the PRO who identified poor accessibility as a major challenge to tackle the inferno,” Oko said.