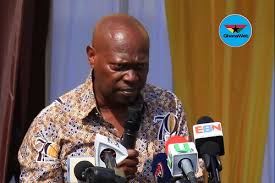 The High Court in Accra was Tuesday told that a first sample of lithovit liquid fertilizer COCOBOD sent to the Ghana Standard Authority for testing was “diluted” to produce a result suitable for its case in the ongoing trial of former Chief Executive of COCOBOD Stephen Opuni and CEO of Agricult Seidu Agongo.

Counsel for Seidu Agongo, Nutifafa Nutsukpui, who was holding brief for lead counsel, Benson Nutsukpui, also told the court that the diluted sample was sent to the wrong department at the Ghana Standard Authority (GSA) for testing.

The appropriate department for testing fertilizer at GSA is the Materials Science Department, the court heard, but the sample which test result was presented in court as evidence by the state was tested at the Drugs, Cosmetics and Forensic Science Department.

It was further revealed in court that the third prosecution witness, Dr. Yaw Adu-Ampomah who was the then Deputy Chief Executive at COCOBOD was the one who signed the cover letter dated 4th April 2017 that accompanied the diluted sample sent to EOCO and onward to GSA for testing.

That test result at GSA showed that the fertilizer had only three active ingredients – calcium, magnesium and urea. One of the recommendations made by the scientist who tested the product noted that it was “harmful to animals and human” but curiously this is the fertilizer Dr. Adu-Ampomah claimed was drank in place of water by a board member of COCOBOD Nana Obeng Akrofi and one other on their farms.

Meanwhile, after Mr. Agongo protested the test result, his counsel noted that the Economic and Organised Crime Office (EOCO) agreed in the presence of the witness (Dr. Adu-Ampomah) for a second test to be conducted at GSA. A sample was taken from COCOBOD warehouse sent to Materials Science Department for testing and the result confirmed lithovit as a fertilizer with all the six active ingredients including: iron, phosphorus, potassium, calcium, magnesium and urea.

Interestingly, the second test result which proved the efficacy of lithovit liquid fertilizer was not presented in court as evidence.

“The only reason why you didn’t attach the second GSA report to your committee report is because it does not support your narrative about lithovit. I put it to you,” the counsel asserted. The witness however countered, “my Lord that is not true. it is because COCOBOD was not a party to that test.”

The witness was also asked if “the first and second accused be justified if they also dispute the findings from the first report because they were not party to it?” Dr. Adu-Ampomah replied “my lord EOCO is the state agency that was mandated”.

Dr Opuni and Mr Agongo are facing 27 charges, including defrauding by false pretences, wilfully causing financial loss to the state, money laundering, corruption by public officer and acting in contravention of the Public Procurement Act.

This has to do with fertilizers acquired by COCOBOD during the tenure of Dr. Opuni as Chief Executive of the state entity

They have pleaded not guilty and have been granted a GH¢300,000.00 each self-recognisance bail by the Court.

Find excerpts of the proceedings below

Q: sir, you have been aware that GSA conducted another test after the GSA report was appended in your report.

Ans: I don’t know. It is University of Ghana Chemistry Department.

Q: the sample of the fertilizer was sent to GSA and EOCO through a cover letter signed by you.

Ans: yes my Lord. I signed such letter but can’t recollect the date.

Q: the accused persons did not participate in the choice of sample that was sent to EOCO by you on a letter cover letter you signed dated 4th April 2017 and then forwarded to GSA.

Ans: yes my Lord. but I can explain, it is EOCO that went to COCOBOD warehouse to get samples.

Q: when EOCO sent samples to GSA and University of Ghana without the participation of first and second accused persons, they protested.

Q: do you know Mr. Paul Adjei Gyan? The head of organised crime unit at EOCO?

Q: when the first and second accused protested, Mr Gyan took them to the head of EOCO where a discussion was held in the presence of you Adu Ampomah about their protest. Do you remember?

Q: after the discussion, it was agreed that a fresh sample be taken in the presence of the accused persons, EOCO and members of COCOBOD. Are you aware?

Q: a fresh sample was taken from COCOBOD warehouse which was Subsequently forwarded to GSA. Are you aware?

Q: the sample was taken to GSA for further testing. Are you aware?

Q: in fact, the second test confirmed the proportion of ingredients in lithovit that showed that it was indeed a fertilizer.

Ans: no. COCOBOD was not a party to it.

Q: what will be your reaction if Mr. Ekow Gyan confirm that COCOBOD participated in this test.

Ans: no my Lord. if COCOBOD participated there would have been a cover letter from COCOBOD.

Q: the report from GSA dated 26th of July 2017, was addressed to Executive Director of EOCO.

Q: the second test again was sent to Executive Director of EOCO.

Ans: my Lord I wouldn’t know.

Q: the GSA report you are familiar with only identified only three ingredients which are calcium, magnesium and urea.

Ans: yes my Lord. and other ingredients.

Ans: my Lord I wouldn’t know because COCOBOD was not a party to the second test.

Q: in fact because of the conflict between the two reports by GSA, eoco called scientists who were involved.

Q: in fact they invited Mrs Genevieve Baah Mante head of material science GSA. did it ever come to your attention.

Q: on the 29th August 2019 did you become aware that Mrs Mante wrote her report accounting for the values in the GSA report .

Q: do you know that EOCO also called Ms Fiona Gyamfi who did test to write a statement on the 29th August.

Ans: I am not aware.

Q: sir, you are aware GSA have different department and laboratories.

Q: you are aware that fertilizers are tested at the materials science department. are you aware.

Q: the GSA test you are relying on was conducted at drugs, cosmetics and forensic science department.

Ans: my Lord I don’t know where GSA does the testing but I know EOCO sent it through appropriate quarters.

Q: sir, you read the first report. didnt you?

Q: did you notice when you read that the person who did the test was looking for common poison.

Q: so you don’t know the report you have so much relied on at the comments remarks side didn’t have poison.

Ans: the report gave some general comments on active ingredient.

Q: did you read that the report stated that the product is harmful to animal and humans.

Ans: yes my Lord this was part of the general comments.

Q: so no human being could have possibly drank it.

Q: so you don’t believe that statement.

Ans: these are comments from scientist.

Q: these statements were not made in a vacuum.

Ans: yes .it is through their research.

Q: Based on the findings, they concluded that the sample was not fit to be fertizers. you believe that ?

Q: you are a scientist. so your remarks on products of this nature is based on what you have find.

Q: Based on the Same finding, they concluded that the sample they have tested is harmful to animals and human. You don’t believe?

Ans: my Lord I didn’t say I don’t believe it. it was part of their general remarks

Q: the scientist at the cosmetics department of the GSA testified on your behalf at arbitration.

Q: and they made statement on your behalf

Q: in fact on the 23rd of July when he personally tested at EOCO during arbitration you were there yourself.

Q: on the 12th of July 2017 in your presence, he said he has subcontracted the test. do you recall?

Q: do you know that although Mr. Quartey Papafio signed the first GSA dated 5th May, 2017, he didn’t actually carry out the test himself?

Ans: my Lord a wouldn’t know.

Q: and Mr Papafio said the sample of the first GSA report was diluted.

Ans: my Lord only GSA can answer.

Q: the material science department said the sample they tested later was definitely a fertilizer.

Ans: my Lord as I have said, COCOBOD was not part.

Q: when the sample of lithovit fertilizer was tested by the material science department the report of which was signed by Mrs Gyamfi and Baah Mantey, predictably the findings and conclusion were different.

Ans: as I said COCOBOD was not party to this.

Q: will the first and second accused be justified if they also dispute the findings from the first report because they were not party to it?

Ans: my Lord EOCO is the state agency that was mandated.

Q: are you disputing the report of 24th July 2017 because COCOBOD was not party to the testing?

Ans: my Lord COCOBOD did not send any sample to EOCO to those names mentioned in the said second test

Q: sir, I put it to you that COCOBOD participated as to where to test the sample being GSA and University of Ghana.

Ans: my Lord, it was EOCO that decided to send the same to GSA and University of Ghana chemistry department but COCOBOD gave them permission to pick samples from their warehouse.

Q: but you are aware the samples were sent to University of Ghana and GSA.