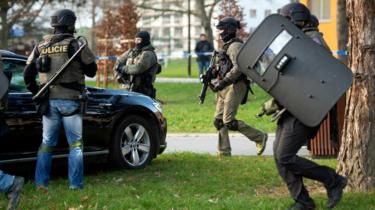 Six people have been killed in a shooting at a teaching hospital in the Czech Republic, the prime minister has said.

The gunman was still at large after he opened fire in a waiting room.

Officers were called to the hospital in the north-eastern city of Ostrava at 07:19 (06:19 GMT) on Tuesday, police said.

According to reports, the shooting took place at a traumatology clinic. The entire hospital was locked down.

A doctor inside the hospital told the Aktualne website that staff had been locked in a hallway waiting for the emergency to end.

“The police are intensively searching for the perpetrator,” police warned, adding that the site in the Moravian-Silesian Region had been “secured”.

The suspect had used a handgun, according to police, who said they had the man’s name, photograph and vehicle licence plate number and were using helicopters to find him.

They also said they were stepping up patrols at what they described as soft targets, such as schools, shopping centres and other hospitals.

Police initially posted an image of a man they said they needed to trace and asked the public for help, but urged people to treat the situation with the “utmost caution”.

The man, described as a witness, was seen wearing a red jacket, about 5ft 9 in height.

Prime Minister Andrej Babis confirmed that six people had been killed and that the shootings occurred at close range in a hospital waiting room.

The governor of the Moravian-Silesian Region, Ivo Vondrak, said the shooting was “a great tragedy”.

Police said that officers responding to reports of a shooting had arrived at the scene within five minutes. Two police helicopters were also assisting the search.