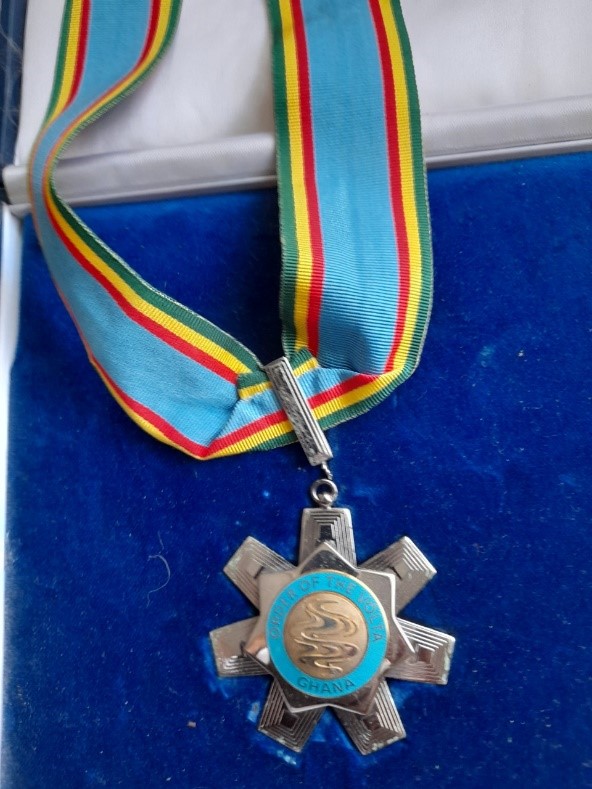 I must come clean: I love honorifics. Anything that imparts or implies respect must be cherished. I cherish my Alhaji, Ambassador and MOV and flaunt them proudly. Ambassador (Actually High Commissioner) was earned when I served my country in Namibia and Botswana as envoy from July 2014 to January 2017, having been appointed by President John Dramani Mahama. Alhaji came long before that when I went on the Hajj pilgrimage to Saudi Arabia in 2005. And MOV, the mysterious one, Member of the Order of Volta, conferred on me by the State, when President Kufuor was about to leave office in 2008 for contribution to media development in Ghana.

There are other awards of state conferred on deserving citizens and foreigners and these include the following: Order of the Star and Eagles of Ghana, Order of the Star of Ghana, Medal for Gallantry and Grand Medal. They all come with their unique pendants and or sashes. The photograph above is that of my MOV. There is also a small medal which I wear on my shirt or jacket pocket. And these awards are accompanied by citations describing the reason(s) for the award. For those who have found the MOV at the end of my name intriguing, that’s all that it is about – Member of the Order of Volta! I thank my country for the honour.

Talking of diplomatic titles, high commissioner is the same as ambassador, only that the former refers to member states of the Commonwealth. A Ghanaian envoy to say, Togo, would be an ambassador but move eastwards to Nigeria and that same envoy would go by the title of high commissioner.

Titles and honorifics once acquired can often travel the full journey from when to the last post. I gave up my job as editor years ago, but there are people who still refer to me as editor with a great deal of gravitas! The professions also wear their badges of honour proudly as Doctor, Lawyer, Engineer, Architect, ad infinitum. In academia, degrees meritoriously acquired through the strict regimen of instruction and examinations are highly valued and so are the honorary ones, conferred after strict due diligence so as not to cheapen or devalue the honour or bring public ridicule to the institution offering it…It can sometimes be scandal-ridden – the world of honours, prizes and awards. Some eyebrow-raising decisions (not the norm) have dogged some of the most influential and respectable honour awarding institutions.

Nobel Prizes, knighthoods, Oscars, honorary degrees from universities are self-regulating and self-renewing: a culture which by and large serves society well.

However, sometimes the integrity of the givers and receivers, becomes suspect due to questionable acts of omission and commission, like the slew of honorary doctorates announced by a number of Ghanaian public universities these past few weeks. As public higher institutions, it is within their powers of incorporation to honour deserving achievers that way. It is also expected that they would have applied rigorous due diligence in their longlisting and shortlisting before arriving at the final honorees.

I need not name names – that would distract – but is the University of Cape Coast (UCC) telling us that it is not aware of the mess in Ghana’s educational sector and how some of the awardees in this category are directly responsible for the mess? They do not deserve it at all. It is scandalous! How can the University of Cape Coast (an institution originally set up to turn out graduate teachers) justify the mess in our current educational system and dare award the perpetrators of this mess honorary PhDs in leadership in education? Is it sycophancy, partisan political grandstanding, or both, that could have led UCC into this egregious academic dishonesty?

And not only that, if they had done rigorous due diligence, they would also have discovered that there is an accusation of plagiarism still hanging over the head of one of them. Plagiarism in academia is one of the major no, no, no taboos! A taboo that can hardly ever be purged. Can the University of Cape Coast convince the Ghanaian taxpayer that its degrees are not fraught with fraud? It is not good enough…

If I may point the University of Cape Coast to a very recent backlash on the “crime” of plagiarism. I will quote it verbatim as it appeared on the social media: “The president of the University of South Carolina has resigned after he plagiarised his closing remarks in a commencement speech almost word-for-word…” This disgraced university president carries the rank of admiral in the US navy. And this is what the UCC has decided to overlook in its over-eagerness to compromise its academic independence by propping up a plagiarising politician with an honorary doctorate! Is that how low Ghanaian institutions of high learning have sunk?

All these honours are not sacrosanct. It is not unusual for an individual to reject an honour on some deeply felt issue of principle, or for an institution to recall an honour already bestowed. In certain instances, protests by the public or other “stakeholders” have led to a proposed honour being rescinded. Marlon Brando once refused to go and receive his Oscar in person but instead sent an indigenous American to receive it on his behalf. His point had been made. When (Sir) Anthony Blunt was unmasked as part of a spy ring for the Soviet Union, his knighthood was recalled. When Barack Obama was elected as the first non-fully white American as US President, an enthusiastic world influenced the Nobel Committee to award him the Nobel Peace Prize. It was criticised by some as too much of a knee jerk reaction. The politics behind awards can be immense and depending on the integrity of reasons behind the award can render it as ennobling or a simple farce. When former US President Donald Trump met the North Korean dictator, Kim Jong Un, some Trump apologists held it up as a Nobel Peace Prize material. Thankfully, it was laughed out of town. Many examples abound about how some high profile individuals were snubbed out of proposed honorifics. Media archive reports on such rejections make interesting reading. Please see below:

“Dozens of political scientists have signed a petition asking the American Political Science Association to rescind a major award to Condoleezza Rice, former U.S. secretary of state and national security adviser and current Denning Professor in Global Business and the Economy at Stanford University. The petition also asks the political science association to create an oversight committee for nominations for public service awards, “so as to screen out those who have participated in policies that have had the consequence of the systematic violation of the human rights of others.” The association announced last week that Rice is the 2018 recipient of the Hubert H. Humphrey Award for public service, citing her strong record. But some political scientists object to that call, based on Rice’s involvement in decisions about the Iraq War and foreign policy more generally under President George W. Bush.

Giving Rice the Humphrey award honors “a person who actively participated in creating a rationale for the illegal invasion of Iraq, participated in and defended the creation of policies of rendition and torture against foreign nationals, supported the creation of a concentration camp at Guantanamo Bay, and aided and abetted the deliberate and systematic lies that were told to the American public to encourage their support for the invasion of Iraq, which, from its inception and to this day, has had catastrophic consequences for the world,” reads the petition drafted by Thomas L. Dumm, William H. Hastie ’25 Professor of Political Science at Amherst College, and circulated by Jodi Dean, professor of political science at Hobart and William Smith Colleges. The association, which convenes in Boston later this week for its annual meeting, did not immediately respond to a request for comment. Rice backed out of speaking at commencement at Rutgers University in 2014, following protests by some students and faculty members.” Source: insidehighered

“Oxford University dealt a wounding blow to the Prime Minister yesterday when its governing assembly, Congregation, refused her an honorary doctorate by a margin of more than two to one. She is only the second person this century to suffer the snub, which came at the most crowded meeting of Congregation that most of those present could remember.

The “No” exit of Sir Christopher Wren’s Sheldonian Theatre was jammed like a London Tube station in the rush hour long after the ‘Aye’ door had taken its last voter. Dons and senior administrators decided by 738 votes to 319 against giving Mrs Thatcher the scarlet and crimson gown and velvet bonnet of a doctor of civil law.

The decision was welcomed by the president of the Student Union, Mr James Dickinson, who presented Congregation with a petition against the doctorate signed by 5,000 students in the seven days since term began. A banner was slung across Somerville, the Prime Minister’s old college, saying “No degree for Mrs Thatcher.”

A Downing Street spokesman said last night “The Prime Minister thought it was very gracious of Oxford University when the Hebdomadal Council proposed that she should be accorded an honorary degree. However, it is entirely in the hands of the university. If they do not wish to confer the ­honour, she is the last person to wish to receive it.”

Dr Denis Noble, professor of cardiovascular physiology and an organiser of opposition to the doctorate, said after the Oxford meeting: “A convincing even mammoth majority demonstrates the seriousness of Oxford’s purpose in protesting against the damage inflicted by government policy on science, education and health.”

The rebuff is a remarkable breach of precedent at the traditionally conservative university. It has accepted all other candidates proposed by its “cabinet,” the Hebdomadal Council, this century except for the former Pakistani president Zulfikar Ali Bhutto. He was defeated in 1975 by 239 votes to 181 on the grounds that he shared responsibility for massacres in Bangladesh.

Salt will be rubbed in the wound by the fact, emphasised by many speakers in favour of the proposal, that all Oxford-educated prime ministers this century have received honorary doctorates.

The scale of the Prime Minister’s defeat was due to a huge turnout by scientific and medical dons, who rarely take part in academic debates but have been roused by the effects of government economic cuts on their research.” Source: The Guardian.

Sort of. If the academic leaders of Cape Coast University are serious about the university’s status as the original university for education, they must think again. The level of embarrassment and the irredeemable low esteem they will place UCC in, cannot be exaggerated. Mediocrity has virtually taken over all our institutions. Cape Coast University should be leading the way for us to protect the little that is left in valuing meritocracy in academia over timeserving spinelessness for the aggrandizement of politicians!  These honorary doctorates are disgraceful!

The Rev. John Creedy will be back.

Cathedral of Doom: Concerns of Moslems brushed aside – Harruna Attah...