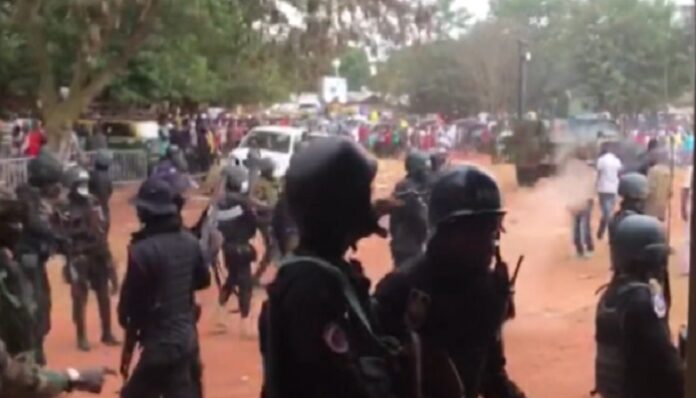 Ghanaian prayers and good sense may yet forestall such a conflagration, but poor Roman Emperor Nero in 64 AD, could not be helped by prayers or good sense and his name has gone down in history as the emperor who fiddled while Rome burned…Though historians question the veracity of this claim, it nevertheless has become a potent metaphor for indulgent, negligent, reckless and irresponsible leadership.

Sometime in 2018 AD, a fuse was lit when Mr. Addo-Dankwa Akufo-Addo, basking in his delusions of an “imperial presidency”, brought about by the outcome of Election 2016, with the flourish of his signature on a dismissal letter addressed to Madam Charlotte Osei, sent her packing as chair of Ghana’s much revered electoral commission. To replace her, he appointed Madam Jean Mensa, of the Institute of Economic Affairs (IEA). whose appointment immediately set in motion activities that would culminate two years later (Election 2020) in flawed, discredited elections with the potential of setting raging fires across the country.

Madam Osei came to public notice when the late President Mills appointed her chair of the National Commission on Civic Education (NCCE). Before then she was managing a thriving law practice and business. She will, sooner or later tell her own story, but when Mills interviewed her and asked about her party, she looked him straight in the eyes and said none. The Asomdwehene was so impressed by such moral courage that he gave her the job.

When the EC chair fell vacant, after Afari Gyan’s retirement, it was natural for her to stroll over from her office at the NCCE to the EC Chair’s office next door. President Mahama saw to that. Her rise was neither due to party patronage nor lobbying. Not so Mrs. Mensa, whose NPP partisan credentials earned her the job. I read a social media story some time ago that said she was seen taking centre stage at an NPP appointees party! Can you imagine?!

But just picture this: If Nana Addo had resisted the temptation of misusing power, avoided pettiness/small mindedness and shunned vindictiveness (all marks of poor quality leadership) and had just left Mrs Osei there to do her job – a job she did so well, it brought him to the executive office after Election 2016. This will remain one of the biggest ifs of Ghana’s modern political history.

Four years on, Ghana is showing signs of overheating, and what do we see? Nonchalance and a devil-may-care posturing from the source of all that overheating: Nana Addo-Dankwa. As Techiman South burned and registered loss of life, the man whose two-term OCD led to that and more, was jetting about to be seen at presidential inaugurations and to cool off in the UK. How very nice! On his return, not a word of sympathy to the families of those who were gunned down from the fire-belching muzzles of assault rifles supplied to our police by taxpayers to protect us, which to satisfy him, they turned against us…

On January 7 2021, a couple of days hence, Ghana will be a step closer to those fires, depending on what drama is enacted in parliament – and after, at the Supreme Court. The arithmetic shows the NDC with more seats than the NPP, giving it the right to elect a speaker, and other senior members of the house. The NPP of Mr. Akufo-Addo is dead against that and if young Mr. Kevin Taylor’s bombshell is to be believed, they are enlisting the services of the chief justice (who should be way above such shenanigans), to bend to the whim of Mr. Addo-Dankwa Akufo-Addo to countermand the decision of a lower court through pressure from the Attorney General to deny the NDC its rightful place in history. The NDC, I suspect, will resist it (and so it must); hat will see parliament in disarray, ergo, Ghana.

When we were set on the road to this potential perdition, greed, moral cowardice, opportunism, hypocrisy, and other dishonourable considerations sealed the lips of those who should have been speaking up. Only the national house of chiefs under the leadership of Togbe Afedi rose above the ostrichism and sounded the warning, for which he was punished with defeat when he ran for a second term. Recently, the Council of State (a useless institution, if you ask me) issued a grudging, weak statement calling for understanding. Too little, too late, I would say…With the likes of the Christian Council, the so called Peace Council and some self-righteous governance CSOs and some sections of the media it was all “Blame it on Mahama”! Not on Addo-Dankwa, who lit the fuse.

The presumed winner and his people will try to put a brave face to this mess, but even they cannot fail to notice the pall hanging over the country and would wish things were more honourable and dignified. If through some deviousness, they are able to squeak through some inauguration, they would agree that it would be without gravitas and national acceptance…

That is just for the complicit frontline individuals and institutions. What about the rest of us? With our bows scratching away on the strings of our fiddles, wouldn’t we also be somewhat encouraging this charade while Ghana is being engulfed in impunity, mediocrity and underdevelopment? When a people allow fanatics to hijack a democratic process for the sake of their megalomania, greed and hubris, would history not be justified in judging those people too as accomplices?

But encouragingly, rescue is at hand.
Remember the AFC of 1995? Alliance for Change. The Kumepreko marches. Ghanaians may yet be called upon to show people power again. At the time of writing some members of the alliance had issued a statement clearly calling on Ghanaians not to accept the destruction of democracy in Ghana currently under very clear and real danger. When the call comes, please join in. I have already counted myself in. The working title is AFC 2021. Hold aloft the banner!

By Amb. Abdul-Rahman Harruna Attah, MOV – | Opinions do not represent the views of Daily Mail GH