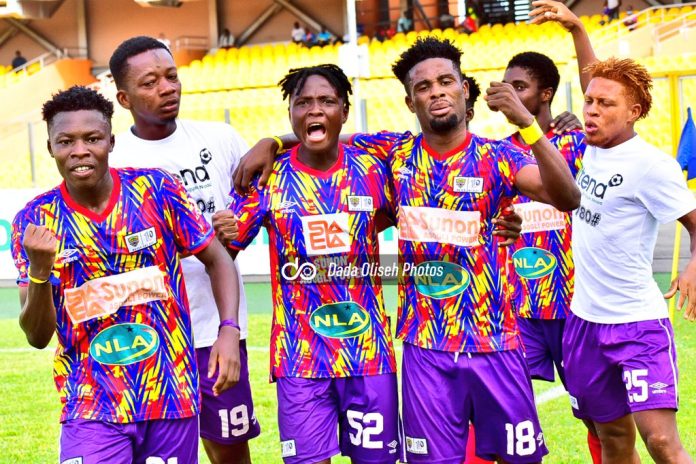 The Rainbow Boys raised a team despite asking the GFA to call off the clash due to a number of players being hospitalized due to the outbreak of an unknown disease at the camp.

Hearts started the game on a blistering pace and were the better team at the start of the match as they dominated the game with some sleek passing in the opening 45 minutes of the match.

Former Kumasi Asante Kotoko SC defender Samuel Inkoom stepped up and calmly slotted the ball into the net to give Hearts of Oak a 1-0 lead in the 11th minute after the home team were awarded a spot kick.

The Rainbow Boys had a total command on the game and dictated the pace ending the half in front.

Right after the break, the away team put an excessive amount of pressure on the Phobians and pushed them back into their own half.

Hearts of Oak on the other hand had clean and good goal scoring chances but failed to make it count as the game eventually ended 1-0.

Hearts of Oak have maintained their 4th position on the Ghana Premier League table after 29 matches with 47 points.

Hearts wwill face relegation threatened side Techiman XI Wonders FC in their next game away from home.