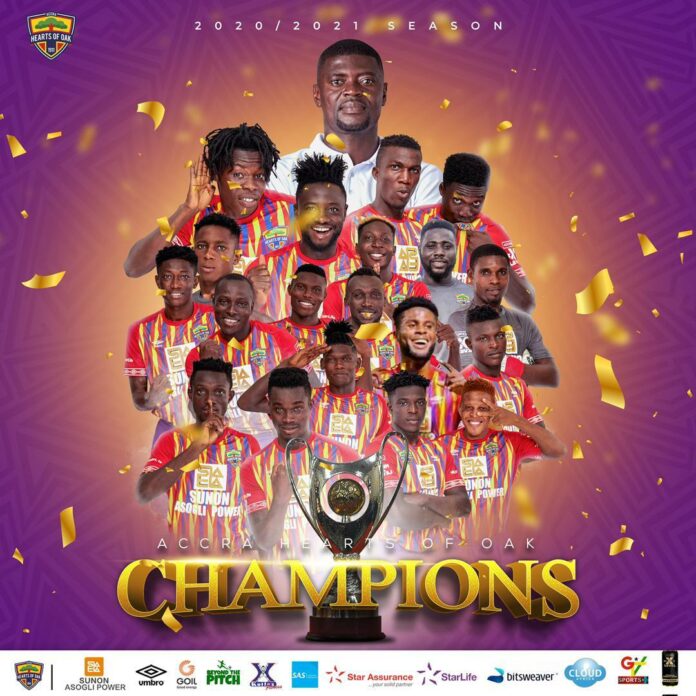 Hearts of Oak drew 1-1 against Liberty Professionals at the Accra Sports Stadium on Sunday to lift the covetous Ghana Premier League trophy for the first time since 2009.

The Phobians did not have a great game in the opening minutes of the match but gradually warmed themselves into the end-to-end encounter.

Liberty had the first chance of the match a few seconds after kick off but Evans Owusu’s in-swinger free-kick from the left hand side of attack was poorly attacked in the box by Kwaku Karikari who should given the away team the lead.

The Scientific Soccer Lads were the better team in the opening exchanges of the match but goalkeeper Richard Attah in goal for the Phobians was alert to any danger posed by the Dansoman lads.

It took a while before the Phobians found their feet into the game and started playing some purposely football through their flanks by their wide men.

Raddy Ovouka and captain Fatawu Mohammed were the brightest spots for the home team as they showed their mettle by putting an end to Liberty’s dangerous attack from the flanks.

Goalkeeper Richard Attah was called into action more than two times and was up to the task as he kept his team in the game by preventing the visitors to take the lead.

Hearts of Oak came into the game after 20 minutes and started commanding the game with a dazzling display from the wings due to the inability of their midfielders to stamp their authority on the game.

Striker, Kojo Obeng Jnr had a great opportunity to put the hosts 1-0 up but decided to use his outer foot in a situation he should have connected with his right and blasted his shot way over the bar.

Obeng Jnr again had a good chance to make amends but could not keep his composure in front of goal and missed his third chance in the first half minutes after missing those two good goal opportunities.

Hearts kept probing and finally got their reward in the dying embers of the half when Ibrahim Salifu’s corner was connected by in-form Daniel Afriyie Barnieh to poke home the opening goal of the match to put the hosts 1-0 up before the break.

Hearts came out from the break with their noses in front as they looked on course to secure the league trophy with a game in hand.

Obeng Jnr burst into the area of the opposition looking to go all the way to score the second goal in the game but the ball was handled by the visitors defender outside the box.

Frederick Ansah Botchway took matters into his hands but his effort was tame and couldn’t trou Kofi Baah in goal.

Ovouka went on a blistering run after a well defended corner before interchanging passes with Salifu but the latter’s strike was well saved by the young goalie, Baah.

Five minutes minutes to full time, Kwame Paul snatched a point for the Blue and Whites at the end of the match.

Hearts of Oak are champions of the Ghana Premier League for the first time since 2009.